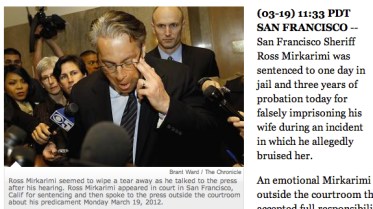 On Google, you can read any one of the 173 stories about San Francisco Sheriff George Mirkarimi being sentenced today to one day in jail and three years probation for falsely imprisoning his wife when he supposedly abused her on New Year’s Eve. SFGate.com’s Rachel Gordon reported:

In addition to the jail and probation sentence, Mirkarimi, who oversees the city’s jails and one of the state’s largest law enforcement agencies, will also attend domestic-violence intervention classes for one year, perform 100 hours of community service, pay $590 in court costs and, if ordered by his probation officer, take parenting classes.

I vote for the parenting classes, especially if they explain how children are  traumatized by watching their mothers being battered.

None of the articles mention if Mirkarimi was asked the 13 ODARA questions. I hadn’t heard about those life-saving questions until I read this opinion column by attorney Bridget O’Rourke that was published on the Lewiston (ME) Sun Journal site yesterday. She wrote in support of legislation proposed in Maine that would require police officers to do a quick risk assessment to determine if the man (not being sexist here, but it’s usually a man) will go after his wife and/or children again and perhaps kill them.

How can just 13 questions keep women and children safe? Because the answers to those questions can reliably predict a batterer’s violent intent. As O’Rourke points out “the time between an arrest and a trial can be particularly dangerous because domestic violence tends to escalate when a perpetrator feels he is losing control”.

The ODARA research page provides more information about the assessment tool. Developed by the Ontario Provincial Police, the Ontario Ministry of Health, and Waypoint Center for Mental Health Care  in Canada, this tool has been tested and validated on hundreds of domestic violence cases to predict future assaults, as well their number and severity.

Here’s a Toronto Star story about the tool, which is described as “covering an offender’s criminal history, substance abuse and whether they’ve previously violated no-contact orders or other bail conditions”.

Does anyone know who’s using it in the US? Or of other tools like this?