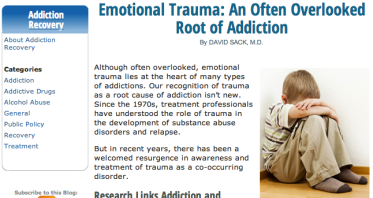 Another study, published in Alcoholism: Clinical & Experimental Research last week, is another in a long list of research that links childhood trauma to addiction, says psychiatrist David Sack. In his blog on PsychCentral.com, Sack says that therapists who are treating addiction should also treat a person’s trauma. He cites the CDC’s ACE Study, and the finding that “chronic recurrent humiliation” — emotional abuse — is one of the most destructive forms of trauma.

NEW HAMPSHIRE’S ATTORNEY GENERAL says: Keep funding domestic violence programs! In an opinion piece on SeaCoastOnline.com, Michael Delaney joins 53 attorneys general and the 50 states and territories in urging  Congress to pass the Violence Against Women Act (VAWA). He says that VAWA’s reauthorization is:

Last year, he noted, the crisis centers in New Hampshire served 11,052 victims of domestic and sexual violence and 743 victims of stalking.