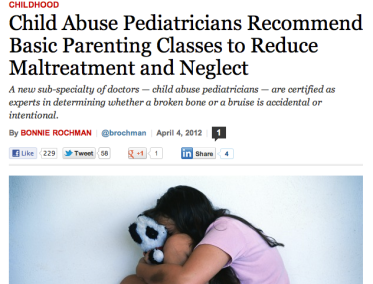 In 2006, 4,569 kids under the age of 18 were hospitalized as a result of child abuse; 300 of those children died. So the U.S. could use more methods to protect  children, according to this story by Bonnie Rothman on Time’s Healthland. She describes a growing subspecialty — the board-certified child abuse pediatrician, “who focuses on identifying child maltreatment and neglect”. Dr. Robert Block, the current president of the American Academy of Pediatrics, is a child abuse pediatrician and worked for a couple of decades to establish the specialty.

Part of the job of the child abuse pediatrician is to advocate for ways to improve parenting skills,

including high school parenting classes, according to the article. Rothman quotes Block:

“Child abuse pediatricians are very much interested in prevention. But we seem to be not very interested as a country in teaching parenting skills.”

FUND THE VICTIMS of Child Abuse (VOCA) Act in the fiscal 2013 budget, Jacquelynn Kuhn writes in a Baltimore Sun op-ed. She says that every president has funded VOCA since 1994, and President Obama’s decision not to do so “shows profound disregard for America’s children.”

The Victims of Child Abuse Act has paved the way for the creation of children’s advocacy centers that offer treatment for child abuse victims and training to prevent abuse from happening. In communities without established CACs, a child abuse victim may have to tell his or her account to more than a dozen professionals. In communities with established CACs, children avoid the revictimization of having to tell their stories several times and instead have access to multidisciplinary teams made up of medical, social service, and criminal justice personnel working together in a coordinated response.

If VOCA is not funded, writes Kuhn, many rural CACs will close, and those in major metropolitan areas and regional centers will drastically reduce services. Kuhn is a program associate in the Baltimore Child Abuse Center. 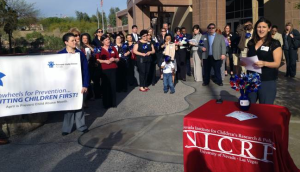 A CAMPAIGN TO PREVENT child abuse launched today in Las Vegas tells single parents: Choose Your Partner Carefully, according to this story in the Las Vegas Sun.

Lisa Teele, supervisor of Metro Police’s abuse and neglect detail, said authorities had found that in more than half of substantiated child abuse cases, the perpetrator was a person caring for his or her partner’s children. Many cases involved a mother’s boyfriend, she said.

If a parent answers any of these questions with a “yes”, according to the Prevent Child Abuse Nevada site, her or his child could be at risk: