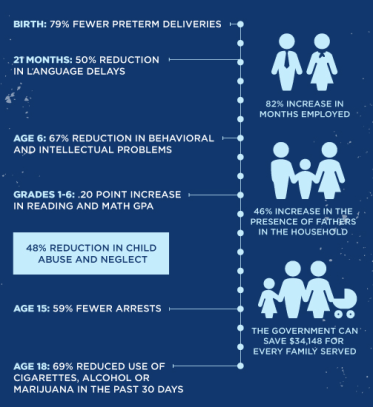 The effects of the Nurse-Family Partnership program.

“The core belief is, child abuse prevention is crime prevention,” said Yellowstone County Attorney Scott Twito at a meeting announcing the adoption of the Nurse-Family Partnership in 15 Montana counties. The story was reported by Greg Tuttle on BillingsGazette.com.

The program is supported by a one-year, $3.2 million federal grant, and local officials urged the federal government to provide ongoing support. The program, which has been shown to cut child abuse and neglect in half, sends a team of nurses, dietitians and social workers into homes to assist the family until the child’s second birthday. It’s currently in 426 counties in 37 states. There are 3,033 counties (or county equivalents) in the U.S.

It’s a voluntary program aimed at poor mothers. But I’d vote for this being provided to every mother, whether she’s a first-time mom or not. What mother with a newborn couldn’t use extra help?

TSA OFFICIALS WERE OUT OF LINE when they yelled at a four-year old, threatened her, and forced her into a pat-down as she sobbed in her mother’s arms, says Kidpower executive director Irene van der Zande in a Huffington Post article, TSA Defends Pat-Down of Crying 4-year Old Girl at Kansas Airport.

Van der Zande put together five tips for parents and five for TSA officials. Among the suggestions for TSA:

TENNESSEE GOV. BILL HASLAM was on hand for opening ceremonies of Memphis’ new Family Safety Center, according to this story by Tennessean.com reporter Brian Haas. It’s a breakthrough for women who experience family violence.

It houses police, prosecutors, counselors, social services, and programs that will help victims escape violence, hold their abusers accountable and move on to a new life. It could serve as a model for other communities, said Olliette Murry-Drobot, executive director of the new center.

She said the current system is too intimidating and complicated for many victims to handle. Already in emotional tumult, they must deal with hospitals, police for protection, prosecutors to file charges, judges for orders of protection, therapists for counseling, social services for housing and occupational help.

The story points out an irony. Haslam derived a lot of good press from being in the spotlight at yesterday’s ceremony, but told Haas it’s not likely that the state will provide any more funding other than the $78,000 it’s giving each year. The center’s three years of funding — about $450,000 each year — comes from two counties and the Plough Foundation.