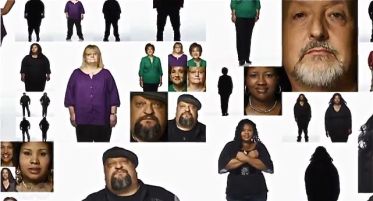 HBO’s four-part series, “The Weight of the Nation”, says a lack of exercise, genetics, an overabundance of sugar and food marketing cause 78 million Americans to be obese and morbidly obese. But HBO missed something significant — the link between obesity and adverse childhood experiences. For millions of people, it’s more important than all the rest.

More than six million obese and morbidly obese people are likely to have suffered physical, sexual and/or verbal abuse during their childhoods, according to the Centers for Disease Control and Prevention’s ACE Study. It’s likely that millions more can point to other types of childhood trauma – including loss of a parent through divorce, living with an alcoholic parent or a mentally ill family member – or other traumatic experiences such as rape or assault — as a starting point for their weight gain.

Here’s the critical irony: Many people who are obese look at eating as a solution, not a problem. Food offers comfort ….a sure, but temporary escape and relief from stress, bad memories, shame, or guilt, even when obesity becomes uncomfortable or even life-threatening.

For many millions of overweight people, information about diets, nutritional advice, food marketing or exercise are irrelevant and will have no effect.

But what will? Well, to get to that answer, you have to go back a few years.

The year was 1985. Dr. Vincent Felitti was mystified. The physician, then chief of Kaiser Permanente’s Department of Preventive Medicine in San Diego, couldn’t understand why 55 percent of the 1,500 people who enrolled in his weight-loss clinic every year left before completing the program.

He was especially confused after examining their medical records: Almost all of the dropouts had been losing, not gaining, weight. It didn’t make sense. Why were people who were dropping pounds dropping out?

Felitti had started the weight-loss clinic in 1980 because many Kaiser Permanente members suffered from health problems, such as diabetes and heart attacks, which were exacerbated by their weight. When patient records of the drop-outs did not reveal a pattern, Felitti decided to ask those who had left the program if he could interview them, and 286 agreed.

During the interviews, two clues surfaced: The first was that none of the participants was born fat – all had normal or below normal birth weights. The second was that people who were severely overweight didn’t gain 10 or 20 pounds a year over several years.

“I had assumed that people who were 400, 500, 600 pounds would be getting heavier and heavier year after year. In 2,000 people, I did not see that once,” says Felitti. When they gained weight, they did so abruptly and then stabilized. If they lost weight, they often regained all of it or more, within weeks or months. 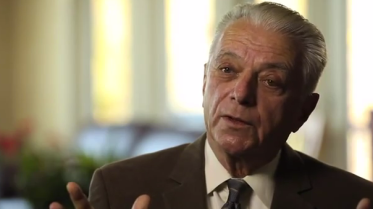 He thought he’d misheard. He asked again. She gave the same answer, began sobbing, and added: “It was with my father.”

The moment remains vivid, says Felitti: “I remembered thinking, ‘This is only the second incest case I’ve heard about in 23 years of practice.’ I didn’t know what to do with the information. About 10 days later, I ran into the same thing. It was very disturbing. It seemed that every other person was providing information about childhood sexual abuse. I thought, ‘This can’t be true. Someone would have told me in medical school.'”

Another piece of the puzzle dropped into place during an interview with another clinic dropout, a woman who had been raped when she was 23. In the year after the attack, she gained 105 pounds. “As she was thanking me for asking the question,” says Felitti, “she looks down at the carpet, and mutters, ‘Overweight is overlooked, and that’s the way I need to be.'”

Felitti began to realize that obese people didn’t see their fat as a problem. For many, it was a solution.

In 1990, Felitti presented his findings at a meeting of the North American Association for the Study of Obesity in Atlanta. Its members told him he was naïve to believe his patients, and they loudly denigrated the study. However, Dr. David Williams, then a researcher from the Centers for Disease Control and Prevention (CDC) was intrigued. “He told me that people could always find fault with a study of 100 people,” says Felitti, “but not if there were thousands. I said that wouldn’t be a problem.”

Williams introduced Felitti to Dr. Robert Anda, a medical epidemiologist at the CDC. Anda had been studying how depression and feelings of hopelessness affected coronary heart disease. Researchers had known since the 1960s that behavior and disease are strongly linked. Drinking too much alcohol for too long can cause liver disease, for example. Excessive eating that leads to carrying a lot of extra weight is linked with diabetes, which can lead to blindness and amputation. But what physicians and public health experts didn’t understand is why people start and continue to smoke, drink or eat excessively, even when they know it’s bad for them.

Anda took six months to research 15 years of child abuse literature, and selected 10 risk factors to measure. Besides the usual suspects: physical, verbal and sexual abuse, and physical and emotional neglect, five others seemed significant. Those were having a parent who was an alcoholic or diagnosed mentally ill, a family member in prison, a mother who was being abused, and losing a parent through abandoned or divorce. Anda and Felitti decided to call their research the Adverse Childhood Experiences Study (ACE Study). 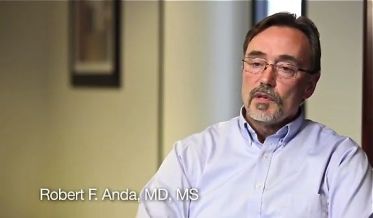 Felitti and Anda, with a dozen other researchers who contributed to the work, published their first findings in 1998 and 1999 in two papers in the American Journal of Preventive Medicine and the Journal of the American Medical Association. Since then, they have published 59 other papers in other prestigious medical journals, including Pediatrics, Child Abuse and Neglect, and the International Journal of Obesity.

“We came up with the conclusion that ACEs were the major determinant of the health and social well-being of members of the Kaiser Health Plan,” says Anda. Since that time 18 states have done their own ACE surveys, with similar results.

The researchers came up with an ACE score to explain a person’s risk for chronic disease. Think of it as a cholesterol score for childhood toxic stress. You get one point for each type of trauma. The higher your ACE score, the higher your risk of health and social problems.

A whopping 70 percent of the 17,000 people in the ACE Study had an ACE score of at least one; 87 percent of those had more than one. With an ACE score of 4 or more, things start getting serious. The likelihood of chronic pulmonary lung disease increases 390 percent; hepatitis, 240 percent; depression 460 percent; suicide, 1,220 percent.

By the way, lest you think that the ACE Study was yet another involving inner-city poor people of color, take note: The study’s participants were 17,000 mostly white, middle and upper-middle class college-educated San Diegans with good jobs and great health care – they all belonged to Kaiser Permanente, a health maintenance organization and one of the sponsors of the HBO series. As Anda has said: “It’s not just them. It’s us.”

The researchers had uncovered what Anda calls a “chronic public health disaster”.

About the same time that Anda and Felitti were doing their research, neurobiologists were discovering why childhood trauma can lead to chronic illness. The toxic stress of the types of adverse experiences in the ACE Study causes the continual release of an overabundance of stress hormones. This physically damages a child’s developing brain. This was determined by a group of researchers and pediatricians, including neurobiologist Martin Teicher and pediatrician Jack Shonkoff, both at Harvard University, neuroscientist Bruce McEwen at Rockefeller University, and pediatrician Bruce Perry at the Child Trauma Academy.

Piece together the ACE Study and neuroscience of childhood trauma and you get a compelling story:

Children with toxic stress live their lives in fight, flight or fright (freeze) mode. They respond to the world as a place of constant danger. With their brains overloaded with stress hormones and unable to function appropriately, they can’t focus on schoolwork. They fall behind in school or fail to develop healthy relationships with peers or create problems with teachers or principals because they are unable to trust adults. With failure, despair, and frustration pecking away at their psyches, they find solace in food, alcohol, tobacco, methamphetamines, inappropriate sex, high-risk sports, and/or work. They don’t regard these coping methods as problems. They see them as a way to obtain relief and to escape from depression, anxiety, anger, fear and shame. In other words, a solution, not a problem.

Do the results of the ACE study mean that all obese people were sexually abused as children? Not at all, say the researchers.

“We don’t want to conclude that every obese child or adult has experienced child sex abuse,” says David Williamson, a CDC researcher who used ACE study data to look at the link between child trauma and obesity. 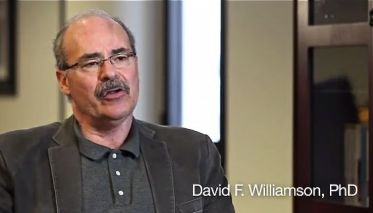 Williamson is comfortable with saying that there’s a link between child abuse – physical, verbal and sexual – and obesity in at least 8 percent of the obese population. That means that among the 78 million obese and morbidly obese Americans, that the CDC says exist, more than six million overweight people are likely to have suffered physical, verbal and/or sexual abuse during their childhoods.

Anda concurs and goes a step further: “There are many paths to obesity; ACE is but one.”

But it’s a significant path. In a special communication in the Journal of the American Medical Association in 2009, Shonkoff, McEwen and Dr. W. Thomas Boyce examined the roots of health disparities, and gave this example:

In 2008, the American Academy of Pediatrics issued a report to address a “new urgency given the current epidemic of childhood obesity with the subsequent increasing risk of type 2 diabetes mellitus, hypertension, and cardiovascular disease in older children and adults.” The report underscored the need for a more proactive approach in childhood to the prevention of cardiovascular disease through enhanced adherence to dietary guidelines, increasing physical activity, and consideration of pharmacologic treatment of dyslipidemia beginning as early as age 8 years. What the report did not consider is the idea, based on growing evidence of the cardiovascular sequelae of early life adversity, that new interventions to reduce significant stress in early childhood may be a more appropriate strategy for preventing adult heart disease than the off-label administration of statins to school-aged children.

Williamson’s study did not include the ACE study’s other categories: two types of neglect and five types of family dysfunction. And, so, for many other people who are obese, Felitti believes it is likely that some type of trauma marks the starting point of the path to obesity. The question requires more research, he says, but “what we’re convinced of at this point is that we’ve made a major landing on the right beach.”

On this beach, says Felitti, fixing the obesity problem with diets or advice about eating won’t have any effect. “Nutrition is a nice subject and has nothing to do with obesity,” he explains. “Teaching people about nutrition is essentially predicated on the assumption that people get fat because they don’t know any better.”

SOON! — A weight clinic that looks at being obese as a solution, not a problem.