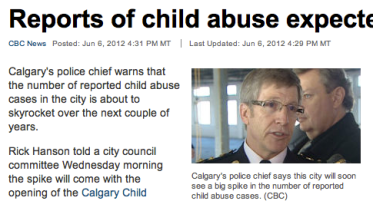 Actually, as you’ll note in the screen-grab above, Calgary, Canada’s police chief said “skyrocket” to describe what he expects to happen when the new Calgary Child Advocacy Centre opens in the fall, according to this post on CBCNews. And that’s a good thing, he says.

The Centre will combine all child maltreatment services under one roof, including police, prosecutors, and health services. Calgary police chief Rick Hanson told the city council to expect many more people to come forward because, at the moment, child abuse victims don’t think they’re taken seriously.

“When the doors of the Child Advocacy Centre open,

you will find that Calgary — based on StatsCan data — will have the highest levels of child abuse in this country,” he said. “But that’s not because more of it’s happening here. It’s because, finally, the victims of this crime will have a place to go where they will feel comfortable and supported in reporting that crime.”

IN LIGHT OF THE TRIAL OF JERRY SANDUSKY that begins on Monday (Sandusky is accused of sexually abusing several boys in Pennsylvania), this court case in New Zealand caught my eye: A woman asked to speak in court to face her offender on the day he was sentenced to eight years in prison, according to this post by reporter Rob Kidd on Stuff.co.nz.com. The victim had been repeatedly sexually abused between the ages of four and nine by Matthew Veevers, who is 10 years older than she.

The woman, who is now 21, tearfully recounted how she had come to the realisation the acts she had been forced to commit were wrong.

The impact of the “repetitive and prolonged offending” continued to plague her.

She told the court she now had trust and anger issues, which had an impact on her relationship with her partner.

A lack of sex drive, suicidal thoughts and obsessive compulsive disorder were also cited as effects of the abuse.

Veevers also cried while he apologized. There was no mention in the story about Veevers relationship with the woman when the assaults occurred (family friend? relative by marriage?) or if he himself had suffered abuse when he was a child, both important pieces of information to know if communities are to prevent child abuse.

STORIES OF CHILDHOOD TRAUMA MUST BE TOLD, says Dr. Claudia Gold on her blog, Child in Mind, on Boston.com.  She begins the column about her father, who rescued his parents from a Nazi concentration camp. She notes that “he ascribed to Elie Weisel’s notion that it was a horror so great it could not be spoken of.” But in her behavioral pediatrics practice, she’s found that it’s better if parents DO talk about their own trauma, whether it is is major, such as a death in the family, or minor, such as a temporary emotional issue.

At first parents focus on the child’s “behavior problem.” But in a non-judgmental atmosphere where sufficient time is given,  parents are usually eager talk about their own history, and become curious about the effects of their experience on themselves as parents, and on their child.

For example, a 4-year-old girl  had severe separation anxiety. It emerged that her mother had a miscarriage when she was three, and had never had the opportunity to mourn the loss. Her daughter was worried about her, and so did not want to leave her either to go to school or go to sleep.  A father of another boy with “defiant behavior.” had been abused by his own father, and found himself full of explosive rage that came out, against his will, in his relationship with his young son.

DR. CHRISTIANE NORTHROP, WHO WROTE Women’s Bodies, Women’s Wisdom and the Wisdom of Menopause, believes that the CDC’s Adverse Childhood Experiences Study scientifically validates many of her experiences as a physician. Recently, on her blog, The Circle, she said:

Adverse childhood events often lead to adult shame and illness. Back in the early 1980s, I realized that every case of severe PMS I saw was in a woman who had come from an alcoholic home or was currently residing in one. Many others with chronic pelvic pain had been sexually abused. This sort of information was what prompted me to write Women’s Bodies, Women’s Wisdom in the first place. My original work was based on my observations in a small town in Maine. The ACE study shows that women’s experiences are the same the world over.