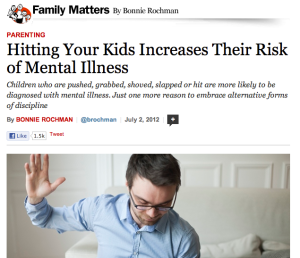 Researchers looked at people who were pushed, grabbed, shoved, slapped and hit as children — a step milder than “punching, burning, physical neglect or sexual abuse,” according to this post by Time.com reporter Bonnie Rochman. The results were grim: depression and anxiety were 1.4 times greater than those who did not experience the “mild” abuse; alcoholism increased 1.6 times and abuse of other drugs 1.5 times.

What qualifies as appropriate punishment is a hot-button topic among parents. The American Academy of Pediatrics opposes corporal

punishment, but studies have shown that up to 80% of parents report that they rely on it to some extent. What constitutes physical punishment is also wide-ranging: everything from a light slap on the hand to an all-out whipping with a belt or a paddle.

“In the general population, there is a belief that physical punishment is O.K. as long as you’re not doing it in anger and you’re a warm and loving parent,” says Tracie Afifi, the study’s author and an assistant professor in the Department of Community Health Sciences at the University of Manitoba in Canada. “But there’s no data supporting that.”

Spanking wasn’t measured because the definition of spanking varies too broadly, according to the story. My personal observation is that spanking is just another form of hitting, only in a different spot. To a child, does it really matter which part of the body gets whacked?

IT’S CALLED WOOF — Wonderful Opportunities for Occupants and Fidos — according to a post by Dena Levitz on TheAtlanticCities.com, and its a way to cut the panhandling problem in San Francisco. “The program will pair residents in supportive housing who agree not to panhandle with adolescent puppies in need of socialization in order to be permanently adopted,” according to the post.

Generally speaking, people who become homeless have experienced a lot of childhood trauma, which led to drug addictions, inability to hold a job or a relationship. And homelessness itself is a traumatic experience. Bevan Dufty, the director of San Francisco’s Housing Opportunities, Partnerships and Engagement was quoted:

“We think it will be absolutely magic to give these 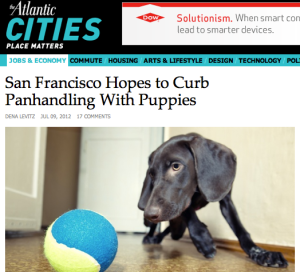 individuals and these dogs a second chance together. For the WOOFers it provides them a sense of purpose and dignity like no other.”

A private donation will provide small payments to the people living at city’s Community Housing Partnership who will work with the dogs. The payments will be $50 to $75/week — about what the homeless would make panhandling.
IED — INTERMITTENT EXPLOSIVE DISORDER — AFFECTS close to six million 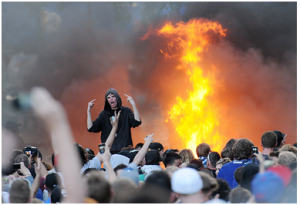 teens in the United States, according to a story by Sharon Kirkey on VancouverSun.com about a study published by Harvard University researchers. “According to the Diagnostic and Statistical Manual of Mental Disorders (DSM) — psychiatry’s official catalogue of mental illness, now undergoing its first major revision in nearly two decades — IED’s central feature is impulsive aggression grossly out of proportion to the situation. People lose control, break or smash things and attack or threaten to hurt someone,” wrote Kirkey. She quoted senior author Ronald Kessler, professor of health care policy at Harvard:

“If we can detect IED early and intervene with effective treatment right away, we can prevent a substantial amount of future violence perpetration and associated psychopathology.”

But there was plenty of pushback to the study that was published in Archives of General Psychiatry, Kirkey found. Here’s one example:

Dr. Allen Frances, former chair of the psychiatry department at Duke University’s School of Medicine, chaired the task force that wrote the current edition of the DSM. He called IED an “unstudied” and “inherently unreliable category that probably shouldn’t be in the DSM at all.

“It most certainly should not be reified into a manufactured teenage epidemic of mental disorder that is allegedly affecting millions of kids,” he said.