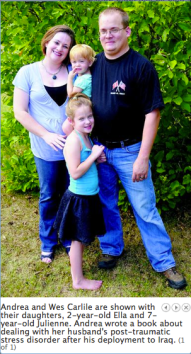 IN THIS CASE, the all-too familiar story of a military veteran suffering the effects of PTSD and unwittingly abusing his family has a happy ending. In “The War That Came Home” Andrea Carlisle describes her experiences in grappling with the PTSD that her husband, Wes, experienced after his deployment to Iraq. In an article by Abbey Doyle posted to the HeraldBulletin.com in Anderson, IN, Carlisle describes events leading to their separation:

It started with nightmares and flashbacks but soon escalated. He was controlling and emotionally abusive.

“His rage created a house of fear and sadness,” Andrea wrote in the book. She said he did things like shredding a painting, putting holes in the wall and denting appliances.

And on Christmas Eve 2010 there was an incident involving a gun that she described in great detail in the book. The two had gotten into

an argument about their mortgage and, in order to push him away, Andrea punched his arm. Wes hit her hard in the side and told her he wished she’d kill herself and went so far as to get his handgun, loading and cocking it before handing it to Andrea.

Their children were 4 1/2 months and 6 years old at the time, the reason she left him.

After they separated, Wes got help, and six months later the two decided to be friends for the sake of the children. It was obvious that he had changed. They stopped divorce proceedings and now live together again.

It’s unusual, according to the story.

PENN STATE FOOTBALL FANS WILL NOTICE a couple of changes in the season opener against Ohio University on Sept. 1. Penn State football players will be sporting new jerseys with their names imprinted on the back, something that former football coach Joe Paterno did not allow. And they’ll be wearing blue ribbons to “show support for victims of child abuse”, according to an Associated Press story on WashingtonPost.com.

School officials said adding the names was a way to recognize the “resolve and dedication” of the players, as the team faces a four-year bowl ban and loss of scholarships under the severe penalties handed down by the NCAA last month over the school’s handling of the Sandusky scandal. 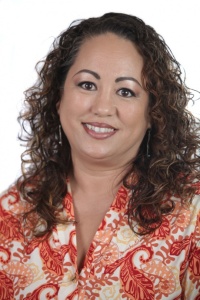 MAUI’S DOMESTIC VIOLENCE CENTER EXECUTIVE DIRECTOR Stacey Moniz is the subject of an interesting profile by Sarah Ruppenthal on MauiNow.com.

The Pukalani native discovered the fight to survive in 1988, when she fled to Oregon with her two young children to escape her abusive ex-husband.

“The violence didn’t end just because I said I was done,” she recalls. “He stalked and violated restraining orders for three years before I got so afraid that I moved to Oregon.” With the help of WHW, she returned to Maui with a fierce determination to help other victims of domestic violence.

And now she leads the organization that helped her get back on her feet – and she says she’s forever grateful.

“I never would have imagined at that time that some day I would become the director of this very same agency that changed and ultimately saved my life,” she says. “WHW taught me to ask for help, taught me that I could determine what I would accept in my life and that I deserved to be treated with respect and kindness.”

PSYCHOLOGIST LISA FIRESTONE posted a short article on Huffington Post that takes a quick look at how trauma affects our culture. On Aug. 20 she will host “a free one-hour webinar, open to the public, that features trauma expert Dr. Christine Courtois.

In her online presentation, “Understanding Trauma, from ‘Simple’ to ‘Complex,'” Courtois will discuss the nature of trauma and traumatic stress, different types of trauma from simple to complex, common responses in the immediate and long-term aftermath, variable adaptations to trauma, and resiliency factors.