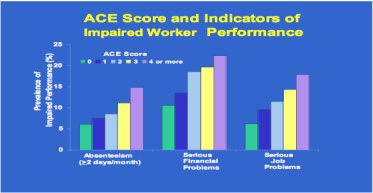 Most of the talk about the CDC’s Adverse Childhood Experiences Study (ACE Study) focuses on the link between ACEs and adult onset of chronic disease; depression, suicide and other mental health issues; violence and being a victim of violence. There’s been less attention on the finding that the higher a person’s ACE score, the increased risk of absenteeism from work, serious financial problems and serious job problems. Now there’s evidence that ACEs affect unemployment, too.

When researchers from the CDC’s National Center for Chronic Disease Prevention and Health Promotion examined the data from ACE surveys in five states, which included 17,469 people between the ages of 18 and 64, they found that the 2009 unemployment rate of men and women was “significantly higher among those who reported having had any ACEs than among those who reported no ACEs”, according to the study published in Social Psychiatry and Psychiatric Epidemiology. Two-thirds of the people in the study had at least one ACEs; 15.1 % of men and 19.3 % of women reported having had four or more ACEs.

Some folks have already taken this information to heart.

When Washington State did its own ACE survey in 2009, it found a “stunning fact”, says Laura Porter, director of ACE partnerships in the state’s Department of Social and Health Service: The survey revealed that “52% of functional disability is attributable to ACES.” Because of how much ACEs contribute to the list of barriers to employment, there’s now a push to integrate ACE concepts into the Department of Vocational Rehabilitation, which helps people with disabilities find work. Many of the state’s communities have already integrated ACE concepts into public health, schools and juvenile justice.

On a national level, ReadyNation, formerly the Partnership for America’s Economic Success, has