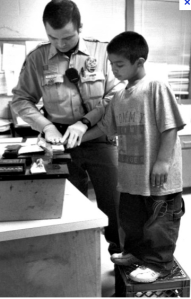 Many people have heard about the school-to-prison pipeline — how harsh school discipline policies funnel kids into the criminal justice system. Last month, the Children’s Defense Fund  issued its 2012 report on the State of America’s Children, whose data show how black children move through the Cradle-to-Prison Pipeline at higher rates than any other group. That’s just part of the story.

“debilitating obstacles that often push them” into prison, the early childhood trauma — and high ACE scores (Adverse Childhood Experience) — result in chronic disease and their ability to live happy, healthy lives. She describes the CDF analysis:

The CDF report is one of a spate of recent reports, analyses, and research that emphasizes a need for a confluence of change in all of our systems. In answering the question “Why does the United States rank so badly in health?”, Daniel Lende on the PLOS blog Neuroanthropology  says it’s:

(1) Societal inequality that helps drive social determinants of health, (2) A worse developmental context for some children from conception on, (3) How behavioral and mental health shape adolescent and adult life and contribute heavily to early mortality, and (4) A contradictory health care system that burdens some through error and over-treatment and does not reach those who really need the preventive and primary care that would help address factors 1, 2, and 3.

And he provides more details on why.

In the most recent — and extremely captivating — episode of “This American Life”, “Back to School”, host Ira Glass features Paul Tough’s new  book How Children Succeed, which examines emerging theories about what and how to teach children, from birth through high school.

Paul Tough discusses how “non-cognitive skills” — qualities like tenacity, resilience, impulse control — are being viewed as increasingly vital in education, and Ira speaks with economist James Heckman, who’s been at the center of this research and this shift.

San Francisco Pediatrician Nadine Burke Harris weighs in to discuss studies that show how poverty-related stress can affect brain development, and inhibit the development of non-cognitive skills. We also hear from a teenager named Kewauna Lerma, who talks about her struggles with some of the skills discussed, like restraint and impulse control.

To dismantle the cradle-to-prison pipeline, to improve our health care system so that the U.S. moves up from  37th out of 191 countries in average life expectancy, and to make sure our children obtain the education they need to be successful in their lives, ALL of our systems — education, health, courts, prisons, business, etc. — need to integrate trauma-informed practices…for everyone.

There’s a broader way of looking at this. One person described this effort of making all of our systems trauma-informed as a social movement. That’s partly because it addresses a big missing piece of human rights — children’s rights.

In most of the world, children are still regarded as the property of their parents or the state. What happens when children are not able to be owned? For one thing, physical and verbal abuse become unthinkable. If you restrain an adult male and hit him across the buttocks, that’s assault. If you scream invectives at a man in public, you are regarded as having issues with anger management. But there’s more to freedom than the freedom from assault. If you’re free, you’re accorded the same rights as other people who are free. In many countries, that includes health care and good education.

Another way to look at is by examining a list that the Children’s Defense Fund put together. The first question to ask when looking at this list is: How did our systems fail this child or family at some point so that she/he experienced this adversity? Add the agencies or organizations — government or otherwise — that can integrate trauma-informed practices so that this doesn’t happen, and you begin to see how many institutions are affected:

Having all of our systems integrate trauma-informed practices addresses children’s rights. But this approach affects much more than children’s rights. We’re entering a time when the recent scientific understanding of how we humans develop and how we respond to our social and emotional environments shows us that compassionate systems that care about and support people rather than punish, shame or blame them result in healthier, happier people. So, treating children differently also means treating their parents differently, too.

Right now, we live in a world where punishment, shame, and blame are normal. Most people think that’s the way life should be. But we’re learning that punishment, shame and blame traumatize people. Furthermore, those approach don’t achieve the results we’re looking for. Instituting “nice” — compassionate, problem-solving, solution-oriented practices — gets better results and costs less.

It doesn’t matter what your politics are, that can work for everybody.