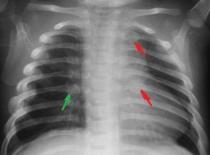 In light of former Pennsylvania State University football coach Jerry Sandusky being sentenced today to spend at least 30 years in prison for the sexual abuse of children, this story out of Yale School of Medicine is noteworthy. Despite many social service agencies experiencing the contrary, until today the expert understanding was that physical abuse of children was decreasing. But Yale School of Medicine professor of pediatrics John Leventhal, Dr. Kimberly Martin of the Johns Hopkins School of Medicine, and Julie Gaither, a graduate student in the Yale School of Public Health, found that physical child abuse has increased nearly 5 percent from 1997 to 2009, according to this story by Kathryn Crandall in the Yale Daily News.

The studies completed by Leventhal and [New Hampshire sociology professor David] Finkelhor differ in several ways, most notably in their data collection techniques. Finkelhor considered “substantiated cases of physical abuse” ­— cases which have undergone legal review by a child protective services commissioner and are registered in the National Center on Child Abuse and Neglect data system — while Leventhal scrutinized reports from the Kids’ Inpatient Database.