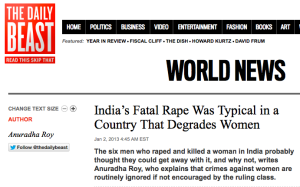 The most thorough, most sickening and astounding overview I’ve seen of the fatal rape of the paramedic student in India appears in today’s Daily Beast: India’s Fatal Rape Was Typical in a Country That Degrades Women. Journalist Anuradha Roy explains the context of why rape is commonplace, and why the protests won’t make much of a dent in the power structure:

In the 2009 parliamentary elections, India’s political parties fielded 6 candidates charged with rape while 34 candidates were awaiting trial for crimes against women. In the state assemblies, 42 members had rape or associated charges against them at the time of their

election. In all, according to a recent report published by the Association for Democratic Reforms, India has over 300 such politicians in power.

She ends the piece by noting that 20 more rapes have been reported in Delhi since the Dec. 16 paramedic was “virtually disemboweled”, including a three-year-old in a play school. That would also be called child abuse. A previous post in May that noted the stunningly high levels of child sexual abuse in Delhi is worth repeating here:

SATYAMEV JAYATE, A TALK SHOW HOSTED BY BOLLYWOOD actor and filmmaker Aamir Khan, takes on the shockingly high rates of child abuse in India. His first show, which debuted last week, focused on female foeticide — the practice of killing unborn girls because of Indian society’s desires for sons. The episode that aired today in India is likely to cause even more controversy, according to this report on IBNLive.com.

Aamir has stirred up a hornet’s nest as statistics have shown in the past that sexual abuse of children is rampant in Indian metros, with the abuser often known to the child.

A survey conducted in 2007 by the Women and Child Development Ministry and the NGO Prayas in association with Unicef and Save the Children across 13 states and with a sample size of 12,447, found that 53.22% of children reported having faced one or more forms of sexual abuse. Andhra Pradesh, Bihar, Assam and Delhi had reported the highest percentage of such incidents at that time.

(Monday, Jan. 7, 2013) Postscript: I forgot to add that it’s very likely the young men and juvenile who are accused of attacking, raping and murdering the young woman were themselves the victims of child maltreatment. That kind of behavior usually does not come out of nowhere — it’s experienced, it’s witnessed, and, without intervention, it’s passed on.