Minnesota released the findings of a state-wide ACE survey today.  The results echo the CDC’s groundbreaking ACE Study. A telephone survey of 13,520 people in 2011 revealed that 55% had one or more types of adverse childhood experiences and, of those, more than half had experienced at least two or more. 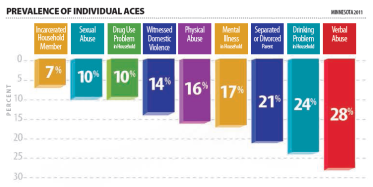 Participants in the survey were asked whether they had experienced one or more of the following nine types of adversity: loss of a parent through separation or divore, watching a mother being abused, a family member in prison, a household member who’s an alcoholic or addicted to some other drug, a household member who’s diagnosed with depression or other mental illness; verbal, sexual and/or physical abuse.

The most common were:

According to a media release issued by the Minnesota Department of Health:

Minnesota’s results are consistent with those found by the initial ACE study and in other states. First, ACEs are common; second, ACEs frequently occur together, and third, higher ACE scores put a person more at risk for poorer health and well-being outcomes as an adult. For example, Minnesotans with more ACEs were more likely to rate their health as fair or poor, to have been diagnosed with depression or anxiety, to report smoking and chronic drinking, to have been diagnosed with asthma, and to be obese. In