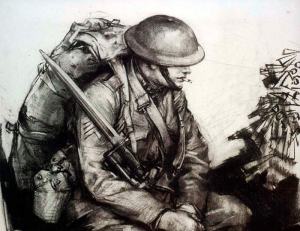 Why some soldiers develop PTSD while others don’t — MedicalExpress.com — “Pre-war vulnerability is just as important as combat-related trauma in predicting whether veterans’ symptoms of post-traumatic stress disorder (PTSD) will be long-lasting, according to new research published in Clinical Psychological Science, a journal of the Association for Psychological Science.” Pre-war vulnerability includes childhood physical abuse and family substance abuse.

Domestic violence top cause of homicides in affluent Fairfax County (VA) in 2009 — WTOP.com — “Eight of the 14 homicides in Fairfax County in 2009 stemmed from a family dispute and most of the victims were women. A 2012 review by a special committee the Board of Supervisors established found that only three of the victims ever contacted police and only one had a protective order prior to dying.” The report itself (FairfaxDVReview.pdf) is interesting, thorough and well-written.

Tarpon group plans display of 10,000 ‘peace flags’ — Suncoastnews.com — “An effort to foster community awareness for people living through the effects of traumatic life experiences took center stage during Tuesday’s Tarpon Springs City Commission meeting. Mayor David Archie officially proclaimed the week of April 5-8 as a time to recognize the Peace 4 Tarpon Peace Flags Project. The initiative’s goal is to display 10,000 handmade flags throughout that week. By doing so, Peace 4 Tarpon organizers hope the flags — each a unique work of art— will resonate with passersby to make Tarpon Springs a more trauma-informed community.” Tarpon Springs, FL, declared itself a trauma-informed community in 2011.