The Atlantic.com posted an animated graphic that takes us from 1985…. 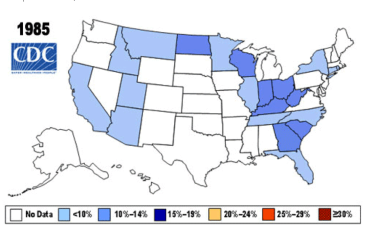 …..to 2010. In just 15 short seconds, you can watch the obesity epidemic balloon across the U.S. The CDC defines obesity as having a body mass index that’s 30 or higher. 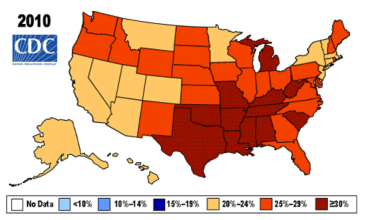 Reporter James Hamblin also posted the 10 metropolitan areas with the lowest obesity rates, and the 11 with the highest. The pegs at either end are Boulder, CO, at 12.5 percent, and McAllen-Edinburg-Mission, TX at 38.5%.

Obesity is linked to childhood adversity. One of the CDC’s ACE Study publications found a link physical, sexual and verbal child abuse and obesity in at least 8 percent of the adult obese population. If there are 70 million obese and morbidly obese Americans, as the CDC says, that means that several million obese and morbidly obese people are likely to have suffered physical, sexual and/or verbal abuse during their childhoods. (It should be noted that this particular publication looked at only three of the 10 types of adverse childhood experiences.)

A number of other researchers are looking into the link between obesity and childhood adversity. Here