Last week I wrote about twinless twins. Casey was a twinless twin, but she never knew it. Her sister was stillborn and we never told her out of fear it would freak her out. But that wasn’t her only challenge when she came into this world on May 3, 1990. She wasn’t ready. Her mother went into labor six weeks early – week thirty. Casey’s birth weight was only three pounds.

Casey probably went straight from the delivery room to an incubator, where she likely spent much of the next two months before she was sent to the orphanage in Mragowo. Who even knows if her mother ever held her?

When my wife and I learned about Casey’s premature birth, we tried to learn everything we could, a task made difficult by the fact that this was 1991; we couldn’t just Google “preemie.” We were years away from a home computer. So we consulted an old high school friend who was a neonatal intensive care nurse.

The long-term effects of a premature birth were terrifying: learning disabilities, vision and hearing problems, digestive and respiratory problems and

cerebral palsy, among other things. And what we first learned about Casey at ten months did nothing to ease our concerns – she couldn’t sit up, stand, crawl, feed herself or do much of anything. Some people (who shall remain nameless) seeking to protect us, urged us to back away. But we couldn’t.

We assumed there was a good chance she might have had cerebral palsy. Best case scenario? She’d probably have developmental delays, learning disabilities or frail health. She might’ve been the smallest kid in the class. As concerned as we were for Casey’s future we’d already fallen in love with her, and then we saw her first image (at ten months). 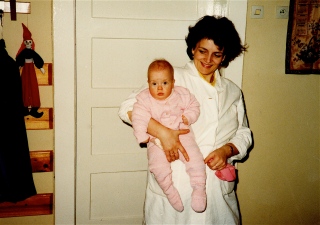 We couldn’t get to Poland fast enough.

The bigger picture never dawned on us, and the doctors we consulted never brought it up – an unwanted pregnancy, traumatic birth, a dead twin, life devoid of human touch for two months followed by limited human contact in an institution for a year. That was Casey’s life before we even met her, but we brushed this off. Just love her enough and everything would be fine.

The fact that Casey defied those odds to become the incredible human being that she did is either a testimony to her amazing willpower or to the basic survival instincts of children faced with impossible odds.