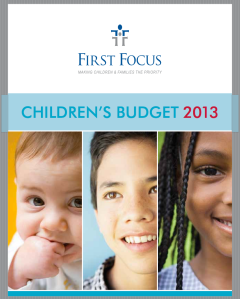 First Focus‘ recently published report, Children’s Budget 2013, shows a decline in total federal spending on children for three consecutive years and reports that less than 8 percent of the federal budget is invested in children. Current Congressional budget negotiations pose a real threat to sustaining even this low level of federal support, in spite of strong public support for children’s programs.

The analysis by the bipartisan children’s advocacy organization looks at the more than 180 specific federal investments in children, ranging from broad

education programs to specific programs addressing child abuse. It includes the traditional child welfare programs as well as programs that impact children, such as housing supports and Social Security. The report provides the funding history for federal spending on specific children’s programs from 2009-2013 and the Obama Administration’s budget proposal for each program in the 2014 Budget. It also includes the cumulative percentage increase or decrease in each program over the five-year period. Both mandatory spending programs, such as Medicaid, and discretionary programs, such as the National Child Traumatic Stress Initiative and other SAMHSA programs, are included in the analysis.

NYTimes economics columnist Eduardo Porter’s put Children’s Budget 2013 in a different context. He noted how conservatives want the US birth rate to increase — since the 2008 recession, it’s dropped to the lowest point since 1920 — but federal spending on children and families keeps decreasing, which makes it more difficult for people to start families. “But there is an odd inconsistency in conservatives’ stance on procreation: many also support some of the harshest cuts in memory to government benefit programs for families and children,” he noted.

Some school districts have been forced to fire teachers, cut services and even shorten the school week. Head Start has cut its rolls. Families have lost housing support. And the 2014 budget passed by Republicans in the House cuts investments in children further — sharply reducing money for the Departments of Education, Labor and Health and Human Services.

But though American families may have adapted better than others to women’s march into the labor force, the United States lags far behind in providing the government support that makes it easier for many couples to start a family.

There is widespread evidence that government assistance to families increases fertility. France’s generous child subsidies, for instance, have been credited with lifting that nation’s fertility rate above 2, from about 1.75 in the mid-1990s. A study in Quebec found that increasing benefits to new parents by 1,000 Canadian dollars increased the probability of having a child by 16.9 percent. One study in Sweden traced its higher fertility compared to other Scandinavian countries to government programs like paid leave and subsidized day care, which made it easier for mothers to work.

Many of the programs mentioned in Children’s Budget 2013 have specific application for preventing and treating trauma in children as outlined in the Dear State Director letter issued by HHS on July 11. The Children’s Budget 2013 report helps us understand recent federal priorities and highlights where investments are being made. By the same token, the State Director letter shows how even limited resources can be leveraged to benefit children experiencing trauma. If you are aware of any specific responses to the State Director letter please share them with us. We will be providing additional information on the implications of this guidance soon.

Elizabeth Prewitt is a policy analyst for ACEsConnection.com, the companion community of practice (a type of social network) to ACEsTooHigh. She served as director of government relations and public policy for the National Association of State Mental Health Program Directors (NASMHPD) from 2006 to 2011. She was the organization’s principal representative on Capitol Hill and liaison with federal agencies for the states’ mental health authorities.