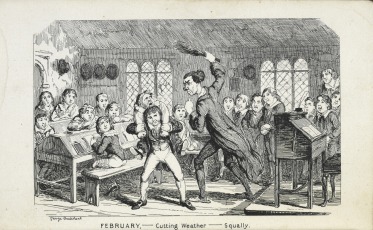 My second grade teacher considered left-handed kids mentally deficient. She assigned me and two fellow lefties to the Turtle table; everyone else was a Rabbit. Rabbit classmates taunted me and I came to equate left-handedness with stupidity. The teacher called the turtles stupid, admonishing us not to tell, because everyone would know we were stupid. I obeyed, although nightly crying spells told my parents something was wrong.

School Superintendent Newman Smith, a member of my church, had known me all my life. One Sunday he asked my mother “What’s wrong with Annetta?” The next morning, he visited my class, folding his 6’4” frame into the tiny chair beside me. We didn’t talk — I was terrified the teacher would think I broke the silence. He recognized a teacher bully, and immediately moved me to another class, although I wasn’t told why.

My new classroom climate was completely different; sunny instead of dark, relaxed instead of tense, with classmates who offered kindness instead of taunts. I felt safe – and tears flowed all afternoon. Mrs. Blaylock, an amazing teacher, rebuilt my confidence.

We know bullying is bad, but what happens when the bully is the teacher?

I have deep respect for teachers; most are altruistic and they receive less recognition than they deserve. Teacher bullying, though rare, has serious implications, not just for bullies’ targets, but also for the school climate.

How can young children defend themselves against these actions? Teachers are bigger than their small charges. Children are taught to obey authority, and young children with one teacher are most at risk. Teachers are human, and they sometimes abuse their power.

Although research on teacher bullying is sparse, Dr. Alan McEvoy, author of Teachers Who Bully Students: Patterns and Policy Implications, surveyed 236 high school students and administrators about teacher bullying. Ninety-three precent stated most students would agree which teachers were bullies.

Research indicates that teacher bullies are usually veteran instructors. According to McEvoy’s research, 89 percent of the perceived bullies had five or more years of teaching experience. Although more research is needed, teacher bullying might be a product of burnout.

McEvoy highlighted the absence of policies addressing teacher bullying, calling on caring educators to tend to casualties when abusive colleagues’ actions go unchecked. Children, or even parents, might not be believed. Colleagues need protection so that they can report abuse. Schools failing to respond unintentionally collude with bullies, seriously harming the educational climate.

Onlookers have power to end bullying or to allow it to continue. Bullying is not a person, but a process. It isn’t enough to say that bullying must stop — the culture that allows it must change.

The National Center for Education Statistics annually publishes the Indicator of School Crime and Safety. The report includes statistics on students who bully teachers, but not on teachers who bully students. A first step in addressing teacher bullying would be to gather data on teacher bullies.

Each school district must have a safety committee to address bullying, not just child on child, but also by teachers or administrators. This sounds simple, but most school districts do not have such plans. We owe this to our children.
Remember the story of the tortoise and the hare? My second grade teacher loved that story.

Caring educators helped me, a turtle, win the race.

Dr. Annetta Ramsay is a licensed and certified counselor who directs the Chrysalis Program, a leading treatment center for eating disorders in Denton, Texas. She is also a fellow in the Op-Ed Project’s Public Voices Fellowship at Texas Woman’s University.