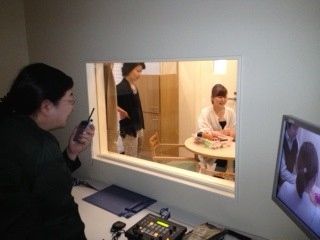 A typical setup for a PICT training, in which a counselor monitors interaction between parent and child.

Francis, a therapist, sits in an observation room with two monitors in front of her; one displays her clients – a grandmotherly woman and a toddler (their names have been changed to protect their identity) — in the playroom next door, and through the other she sees her virtual trainer, psychologist Dawn Blacker, who observes from her office hundreds of miles north at the University of California, Davis.

Francis is wearing a headset, and every 45 seconds or so she gives the woman in the playroom instructions through a “bug“ in the woman’s ear.

“Good label praise, Mrs. Green,” Francis says. “Good reflection.” Francis is following protocol by verbally reaffirming Mrs. Green’s actions as the woman and the toddler play on the other side of the mirror.

Francis is being trained to deliver Parent-Child Interaction Therapy (PCIT) at Kedren Mental Health Center in Los Angeles’ West Adams neighborhood. Kedren serves mostly biological parents, some of whom are involved in the reunification process with dependency court, but it also serves foster parents and parents of children with speech delays or who are on the autism spectrum.

PCIT is part of a child maltreatment prevention program being rolled out across Los Angeles County through a partnership between the county’s Department of Mental Health and First 5 LA. As The Chronicle of Social Change reported in July, the goal is to train as many as 400 therapists in PCIT through this partnership.

Training for local PCIT therapists uses technology that allows a trainer, in this case Blacker, to see both the trainee, Francis, in her observation room and her clients, Mrs. Green and Kiana, in a playroom that his been outfitted with a one-way mirror so Francis can see in.

The yearlong training starts with an online course and culminates when a trainee completes two cases, meaning they work with two families and provide each with up to 20 therapy sessions. A trainer like Blacker oversees each of these sessions. This is Francis’ first case, and the 12th session with Mrs. Green and Kiana.

Last month, hundreds of professionals gathered at the University of California, Los Angeles for an annual PCIT conference. Researchers, therapists and other professionals explored how PCIT clinicians can best serve families who are involved with the child welfare system.

The timing of the conference comes at an opportune moment. Over the past year a Blue Ribbon Commission on Child Protection has brought almost every aspect of Los Angeles County’s child welfare system into question, including the training and performance of those community-based contractors that partner with county agencies to undertake the difficult task of protecting children and preventing them from entering foster care.

First 5 LA’s investment in PCIT represents one of the largest expansions of a children and family-centered mental health program in the country, and also points to the importance of rigorous training to ensure that contracts result in improved outcomes for children.

“First 5 LA is focusing on the ‘Building Stronger Families’ framework which embraces the belief that child abuse and neglect can be reduced through family strengthening,” said Bill Gould, a program manager for First 5 LA. “With its rigorous evidence base, prevention and early intervention orientation, PCIT is a key current initiative in our family strengthening effort.”

The PCIT training process is organized into three phases and is different from other trainings, according to Anthony Urquiza, the director of the PCIT Training Center at UC Davis. Typical mental health trainings consist of a two-day workshop and a phone consultation, Urquiza said.

PCIT follows a “train the trainer” approach, meaning that first-generation trainees like Francis are expected to train the next generation of therapists.

“I sponsored this pilot program because so often parents with challenging children need more support and training than they have,” said county supervisor Mark Ridley-Thomas. “With the right tools they are able to foster better relationships with their children, employ appropriate disciplinary measures and as a result, we reduce the need for medication or parent-child separation.”

Los Angeles Dependency Court Judge Margaret Henry said that she was already referring parents to agencies that had PCIT programs in place.

“They get excited about the opportunity to visit and interact with their child rather than getting talked to for an hour,” Judge Henry said. “I hope we could return more children to their parents with PCIT.”

At the end of the 45-minute session, Francis prompts Mrs. Green.

“Okay, Mrs. Green. Let’s tell Kiana that special play time is over and it’s time to clean up the toys,” Francis says through her headset. Mrs. Green repeats the message to Kiana, who easily shifts her focus from playing to cleaning up, and even puts the lid on the toy box once everything has been put away.