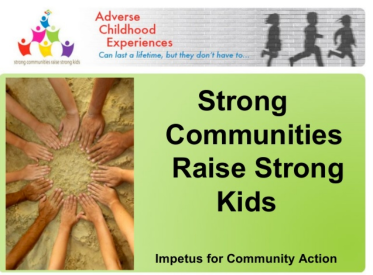 Not long after Marcia Stanton stumbled across the original article from the CDC’s Adverse Childhood Experiences Study, she heard a conference presentation by Dr. Vincent Felitti, one of the study’s co-authors. She invited Felitti to do grand rounds with 100 pediatricians at Phoenix Children’s Hospital, where she works.

“I thought they’d be all over this,” says Stanton, a social worker in the hospital’s Injury Prevention Center, where she coordinates child abuse prevention programs and promotes primary prevention. After all, the study revealed a direct link between 10 types of childhood adversity and the adult onset of chronic disease (cancer, heart disease, diabetes, autoimmune diseases, etc.), mental illness, violence and being a victim of violence. It showed that childhood trauma

was very common — two-thirds of adults have experienced at least one type. It showed that if people had experienced one, they usually experienced more. And the study showed the more types of trauma experienced, the higher the risk of chronic disease and mental illness. For example, an ACE score of 4 increased the risk of suicide by 1200 percent and alcoholism by 700 percent.

Felitti had warned her that physicians were typically slow to warm to ACEs research. Not these physicians, she thought.

“After a very compelling one-hour presentation, there were only a couple of questions from the physicians,” she recalls of the 2006 event. “Everyone filed out, and that was the end of it. I was shocked at how little response there was.”

She sighs. “So we put our efforts in other directions.”

Looking back over the last eight years, Stanton reflects on the progress of the Arizona ACE Consortium. “We’re moving ahead,” she says. “But it’s as if we’re in a maze. We hit a wall, bounce back, reverse and go another direction. We’ve learned that we have to go where the interest is.”

In fact, for a grass-roots organization that has no funding and one part-time coordinator (Stanton spends 20% of her part-time 32-hour-a-week job on the project), the Arizona ACE Consortium has a stunning list of accomplishments:

After Felitti’s visit in 2006, Dr. Mary Warren, who helps coordinate the Best for Babies program at Prevent Child Abuse Arizona, teamed up with Stanton to spread the word about ACES. Stanton and Warren convinced Phoenix Children’s Hospital to bring Felitti back the following year for a conference and a community round-table discussion. His visit prompted about 50 people to express interest in figuring out how to implement the research in Arizona. 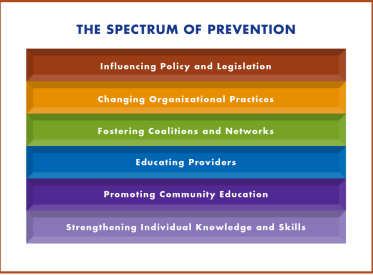 The Arizona ACE Think Tank used “The Spectrum of Prevention,” part of tools by the Prevention Institute, to produce a campaign that shifts perception of prevention from teaching healthy behaviors to identifying 6 levels of interventions.

Of those 50, four to six people began meeting regularly. They called themselves the ACE Think Tank. And they spent the next couple of years talking, doing presentations to whomever was interested, and, well, thinking.

First, they decided to think big; they wrote a $1,000,000 grant proposal that would screen all patients coming through Phoenix Children’s Hospital for ACEs. It was turned down. “That was the last big grant we applied for,” says Stanton.

If you convince thousands of people to think small, that’s thinking big.

Thinking small seemed the way to go. But the secret they discovered was that if you convince thousands of people to think small, that’s thinking big. They used Prevention Institute’s Spectrum of Prevention tool that “encourages people to move beyond the perception that prevention is about teaching healthy behaviors” and identifies six levels of intervention—for instance, increasing individuals’ knowledge, educating providers and influencing legislation—that may not seem related at first, but end up complementing each other.

After several years of making do with what they realized were their own considerable connections and resources, the small-group ACE Think Tank launched the statewide ACE Consortium in 2010 with several high-profile projects and events:

In 2011, the consortium hosted a second train-the-trainer workshop, developed a strategic plan, began a social media campaign, and worked with Eight, Arizona PBS on another local prime-time special, “Forgiveness: Ask an Arizona Expert.”

In 2013, the consortium hosted the state’s first Child Well-Being Summit, which members hope will become an annual event. The demand for the train-the-trainer workshop is so great that they’re now doing two a year.

Earlier this year, the consortium released “Overcoming Adverse Childhood Experiences: Creating Hope for a Healthier Arizona”, which reported that nearly 70,000 Arizona children have an ACE score of 5 or higher. The report went to all Arizona legislators. The consortium is preparing an addendum that includes county-specific data. An ACEs Clinical Practice Work Group is developing “do’s and don’ts” guidelines for organizations considering using the ACE survey as a screening tool, as well as a list of trauma-informed and culturally relevant counseling and peer support resources. 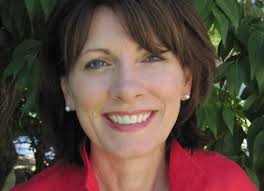 It turned out that “thinking small” meant growing and taking advantage of a network that has exposed tens of thousands of people to detailed information about ACEs. Today the consortium boasts more than 200 members statewide; 50 of those are active, and the others participate when called upon, such as to print materials for the workshops, donate space for trainings or contribute small amounts of money for speakers’ fees. The consortium continues to hold quarterly meetings.

Some of these organizations have incorporated ACEs, trauma-informed and resilience-building practices into their everyday work:

As with any big cultural change, the picture isn’t all rosy. Stanton does orientation classes with all new clinical staff (non-physicians) twice a month at the hospital. “These are large classes, 75 to 80 people,” she says. “I always ask how many people know about the ACE Study. In the last two classes, there was absolutely no one who raised a hand. This research is just not permeating health education. Social workers know about it, but not health care providers.”

Unfortunately, the hospital has ended orientation about ACEs; Stanton will instead offer “lunch ‘n learns”.

This article about Arizona is one of several profiles of communities that are becoming trauma-informed. They are published together in the Community Resilience Cookbook.

She also sees awareness gaps in other sectors. She rattles off a list: education, public health, behavioral health, child welfare, and business. “I’d like to do more with youth and teens,” she says. “I think we’re missing a big opportunity with them, as well as mommy bloggers and young parents.” She pauses. “It’s kind of endless.”

She’s also frustrated that the state has taken so long to include the ACE module in the BRFSS. The data in the 2011/2012 National Survey of Children’s Health indicates that more than 25% of Arizona kids aged 0–17 have already experienced one adverse family experience, while 31% have experienced two or more. The nationwide average is 22.6% of children experiencing two or more ACEs.

More alarming, among older Arizona children, those aged 12-17, 44% have experienced two or more ACEs, compared to the nationwide average of 30.5%.

“Arizona is dramatically higher than the nationwide average,” Stanton says. “This is the canary in the coal mine.”

The ACE Consortium is at a significant turning point, she says. While there’s an obvious momentum—“an ACE vibration,” as Iowa’s former ACEs coordinator Sonni Vierling describes it—much of what the Arizona consortium has done has “been by the seat of our pants. We need to get more strategic.”

Although “every time we’ve needed something, someone in the consortium has stepped up and provided resources,” the ACE Consortium is at its limits, Stanton says. To do more training in all sectors, to bring sectors together, to support changes in organizations, to work with the governor and legislature on a statewide plan, to help communities develop their own plans, to create ways to evaluate activities—all this and more requires a new level of organization and funding.

Stanton has hope that she and others in her state will meet this stepped-up challenge. “We started with nothing,” she says. “And now we have a small army of people who want to help.”

This is one of several articles about how different towns, cities, states and provinces are beginning to embrace an ACEs movement and become engaged in preventing/treating ACEs and promoting resilience. They were done as part of a Community Resilience Cookbook, produced by the Health Federation of Philadelphia with support from the Robert Wood Johnson Foundation.