On Feb. 12, California Attorney General Kamala Harris held a press conference in Los Angeles to announce the creation of a Bureau of Children’s Justice. Its goals range from reducing truancy and combatting childhood trauma, to improving the foster care and juvenile justice systems.

While the mandate Harris outlined was broad, members of the bureau’s new staff said that this was by design. Aside from a handful of specific issues, the office is currently in reconnaissance mode, gathering ideas on improvements to education, juvenile justice and child welfare that it can champion.

“We aim to work with a wide range of stakeholders to find accountability and enforcement gaps,” said Jill Habig, a special assistant attorney general leading the bureau, “which is why we invited over 150 stakeholders to convenings held across the state following the launch of the bureau.” 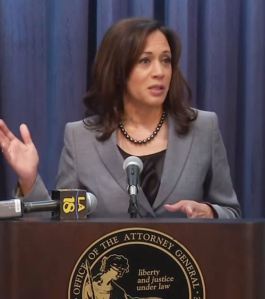 Those convenings took place the week after the announcement in Sacramento, Los Angeles and Oakland, and offered Habig and colleagues a chance to describe the bureau’s purpose, and hear from advocates, public officials, philanthropists and other interested parties.

Some areas that the bureau is looking to make an impact in immediately are identity theft and using data housed within the California Department of Justice to sniff out enforcement gaps in areas like child abuse reporting and beyond.

“We know that identity theft among foster youth is a huge area of concern,” Habig said in an interview. “And we have a unit at the Attorney General’s office, the E-Crime Unit, that specializes in technology crimes like identity theft.”

Amy Harfeld, the national policy director of the Children’s Advocacy Institute in San Diego, said that she had worked on two federal bills aimed at addressing identity theft among foster youth. In September 2011, President Obama signed a separate bill, the Child and Family Services Improvement and Innovation Act, which included a provision mandating that “that each child age 16 and older in foster care receive a copy of any consumer credit report annually until discharged from foster care, and must be assisted in interpreting the credit report and resolving any inaccuracies.”

While the law was supposed to go into effect in October 2011, Harfeld, who contributed to a recent report that derided lax federal oversight of child welfare services, was dubious about the degree to which the child welfare system was ensuring that children in California and across the country were not falling prey to identity theft.

“I would recommend what this agency [The Bureau of Children’s Justice] addresses on the front end is compliance with the federal law that was passed,” Harfeld said.  “What were the results, and what are we learning?”

Harfeld also said that protecting youth who are 16 and older may be too late, and suggested that the bureau be cognizant of some of the underlying poverty issues that contribute to identity theft among children caught up in the child welfare system.

Oftentimes, she said, “the people who have abused this information to commit the fraud are members of the child’s family. I think quite a lot of this is based in poverty. A family can’t pay the bills and the lights go out, so they open up account in their kid’s name.”

Beyond identity theft, a letter the Attorney General sent to the state’s 58 counties on the day she announced the new bureau highlighted child abuse reporting, with a reminder to law enforcement and child protection that all substantiated reports of child abuse must be be sent to Department of Justice.

Habig said that this is just one of many databases housed in the Department of Justice that could be mined to help steer its efforts.

“What we are trying to do internally and with our partners is find a better way to take stock of and use the data that we have in the state to assess enforcement needs or also policy needs and policy gaps that we need to fill,” Habig said.

While these issue areas were on the bureau’s radar when Harris announced its inception in mid-February, there are a whole raft of new ideas that were shared at the three discussions Harris’ office organized across the state.

Frankie Guzman, a staff attorney at the National Center for Youth Law in Oakland, CA, attended the third meeting in Oakland. In an interview afterward, Guzman said he hoped the bureau would step up as a voice of reason against what he considers an arcane practice where California minors are often tried as adults.

“They get denied the benefit of the juvenile justice system, but all of the harm of the adult system,” Guzman said. “They rarely come out rehabilitated. For us to acknowledge that what we are doing to these kids is in fact harmful; that needs to be said.”

Guzman also said the bureau could maintain better records of how often minors were tried as adults and the reasons why so that policies could be introduced to reduce the practice.

Amy Cohen, who until recently served as the lead psychiatrist at Alameda County’s juvenile hall, also attended the meeting in Oakland where she shared her deep concerns about the way juvenile offenders were being treated inside and outside the hall.

“Upwards of 90 percent of kids in juvenile had diagnosable PTSD [post-traumatic stress syndrome] in my experience,” Cohen said in an interview after the meeting. “The juvenile justice system is making them worse and making them sicker. The Bureau of Children’s Justice needs to look at that as a civil rights issue.”

Video courtesy of the California Department of Justice.

Daniel Heimpel is the founder of Fostering Media Connections and the publisher of The Chronicle of Social Change.