CHICAGO—Across the United States these days, it seems as if hardly a week goes by without a conference or a workshop about adverse childhood experiences (ACEs), and how people are implementing trauma-informed and resilience-building practices in their organizations — including schools, prisons, homeless shelters, hospitals, medical clinics, youth services or businesses.

For people who have known for years about the ACE Study, epidemiological research completed by Kaiser Permanente in San Diego and the Centers for Disease Control — such as Laura Porter and Dr. Roy Wade, both of whom spoke at the Midwest summit –- this interest can’t come soon enough, given the significance of the research.

Still, for most people – although probably not including the 140 attendees at the third annual conference hosted by the Illinois ACE Response Collaborative  – their response is: “What are ACEs?” “What’s trauma-informed?” “What does resilience-building mean?” 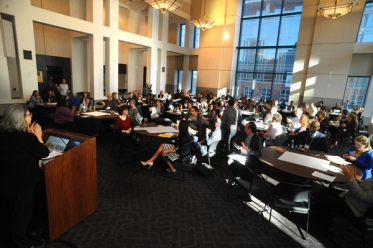 Research has shown a direct link between childhood adversity — ACEs – and the adult onset of chronic disease, mental illness, violence and being a victim of violence, explained Wade, a pediatrician at the Children’s Hospital of Philadelphia (CHOP) and member of the Philadelphia ACE Task Force. ACEs create mental and physical health risks that continue to crop up over a person’s lifetime if not adequately addressed.

These can include developmental delays early in life, mental health and academic achievement issues in childhood, involvement in the juvenile justice system, and alcohol and drug abuse as a youth and adult. 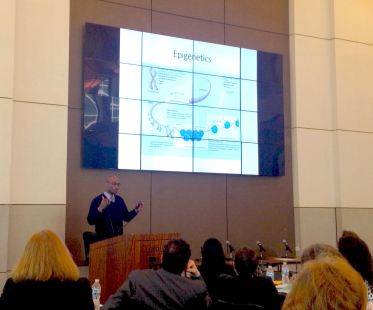 The original ACE Study – the first of its 60+ research papers was published in 1998 — measured 10 types of childhood adversity, those that occurred before the age of 18. They are physical, verbal and sexual abuse; physical and emotional neglect; a family member with mental illness, or has been incarcerated or is abusing alcohol or other drugs; witnessing a mother being abused; losing a parent to divorce, separation or death. (Got Your ACE Score?)

Wade described how the Philadelphia Urban ACE Study, published in 2013 and the only ACE survey done in a major U.S. metropolitan city, added more types of adversity to the 10-point ACE scale, including witnessing violence, experiencing racism and living in an unsafe neighborhood. In this study, 1,784 adults were surveyed. The results showed that:

The significance of the original ACE Study, the Philadelphia Urban ACE Study, and similar surveys that have been done in 29 states and Washington, D.C., has been borne out in research into what happens to the brain and body when it’s inundated by the toxic stress caused by childhood trauma.

In particular, the brain becomes “bathed” in a stress hormone called cortisol, producing more of it and holding it for longer, Wade said. That saturation of cortisol has been shown to impact metabolism, blood pressure and immune cell function, creating a greater risk for conditions like obesity, cancer, diabetes, hypertension, depression and anxiety, he said.

“These are changes at the molecular level that increase health risks,” Wade said.

The areas of the brain harmed by ACEs include:

And epigenetic research – which looks into how the social and physical environment turns our genes on and off — has shown that those changes impact a person’s offspring, whether or not the children experience ACEs first-hand, Wade said. Early education programs like Head Start and support for positive parenting help to break that intergenerational cycle, as does pediatric screening for risk factors, which he and his colleagues do via the Safe Environment for Every Kid (SEEK) model.

CHOP pediatricians encourage at-risk mothers to seek community resources that will strengthen their life situations, ranging from programs that help them finish high school to access to food pantries, to help ensure that life stresses don’t cause ACEs to be handed down to the next generation, Wade said.

“All of these buffer these families and buffer their kids who are at risk for ACES,” he said.

At the Crittenton Children’s Center in Kansas City, the Head Start Trauma Smart community-based model provides classroom coaching, individualized trauma-focused intervention, and training for all staff and parents in ACEs, right down to the bus drivers, since they’re “the first person the child sees that day, and they can set the whole tone,” said Avis Smith, director of prevention and school-based programs. She participated in a panel that featured people who were implementing trauma-informed and resilience-building practices based on the ACEs research. 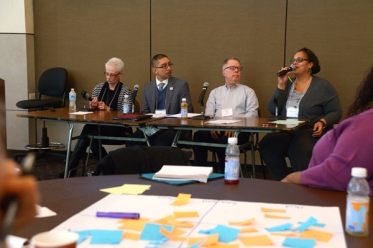 Adult staff often are suffering from ACEs as much as the children, so helping them get in touch with their own experiences is a “core component” of the training, Smith said. To screen the children, they ask parents to complete a 26-item survey.

“We thought families would be very reluctant to give us accurate data,” she said. “We have found just the opposite: They want their kids to get the very best treatment. They want their children to not have to go through what they went through.”

They have found that 89 percent of children had at least one ACE, 75 percent had two ACEs and 69 percent had 3 ACEs, Smith said. At the end of the Trauma Smart intervention, all children who had exhibited internalized trauma behaviors such as anxiety, depression and eating disorders had improved to the point where they were acting normally, while 61 percent of those with externalized behaviors like biting or kicking had done the same.

The bottom line: a cost of $411 per preschool-aged child for these Head Start services, vis-à-vis the average cost of special education in kindergarten at $30,000 per child. “That’s a huge savings,” Smith said.

The YMCA of Metropolitan Chicago trains all staff in concepts related to ACEs and sees that knowledge as “an important foundation of our work,” said Eddie Bocanegra, co-executive director of the YMCA Youth and Safety Violence Prevention Program in Chicago, who also participated in the panel.

He talked about how the term “post-traumatic stress disorder” brings to mind the military and war, and he likened those who experience ACEs to the concept of “child soldiers” as defined by the United Nations. The YMCA has enlisted Vietnam veterans to be mentors to troubled youth but needs to make sure they have healed their own scars as best they can before attempting to help others, Bocanegra said.

Tom Scott, clinical professor and interim residency director of developmental-behavioral pediatrics at the University of Minnesota, said he works to guide parents to nurturing rather than punitive responses and sees the needs for early childhood screenings that cover several topics, including autism, social and emotional issues, maternal depression, developmental delays and ACEs.

When it comes to behavioral results of ACEs, Scott examines areas like self-regulation, adaptive functioning and interaction with other people. “You can imagine the impact of ACEs on any of these,” he said. “The social-emotional area is the best measure of toxic stress levels.” And he works to develop the “7 C’s of resilience”: competence, confidence, connectedness, character, contribution, coping and control.

Laura Porter, senior director of the ACEs Learning Institute at Foundation for Healthy Generations and co-founder of the consulting company ACE Interface, which does workshops to train people to educate their communities about ACEs research, was instrumental in educating Washington State’s Family Policy Council’s network of 42 communities about ACEs research in the early 2000s. In her keynote speech, she talked about the importance of back-and-forth “call and response” interaction in educating those unfamiliar with the “meta story” of how ACEs impact people.

This call-and-response pattern, not unlike improvisational jazz music, provides the opportunity to disseminate the latest knowledge about ACEs, and to see how those in the political sphere and the general population react. Sometimes they don’t react positively, but that’s okay, Porter said.

“Engagement is what we want,” she said. “The only bad response is no response, and we haven’t seen that on the ACE scene, ever.”

To advocate for ACEs-informed approaches across societal institutions, those in the field need to learn which “calls” engage which people, with the ultimate goal to reach people of all races, economic levels and professions.

“You can’t expect one call to engage everybody,” Porter said. “As Martin Luther King said, ‘The time is always right to do right.’ If you’re really listening, you’re probably doing right.”

To the extent that ACEs advocates come up against resistance, that doesn’t mean they’re saying anything the wrong way. “It may just be a sign of the times, where the collective belief is,” she said. “One of the challenges of leading a social movement is that the collective [mindset] isn’t necessarily with you at every moment. That’s part of leading.” But there’s an art to not getting too far ahead of people, she said, and noted how a colleague once said: “It’s not really leading if you’re running so fast that no one is following any more.”

That’s why advocates need to listen to what’s resonating, “what is a magnet to bring people along,” Porter said. “And that we don’t get discouraged and pre-determine what their response is going to be. … But really we’re in meta-dialogue with the public as a whole, and the best way to listen is to truly be present with what people are saying back to us.”

When talking to legislators and agency executives who say they don’t have the capacity to deal with ACEs, Porter’s response is to go back to communities and say, “How do we build this capacity?” she said. “Learning about the ACE Study helped us to be more specific and clear about the accumulation of community and family challenges, and the effects.”

Because those in the ACEs field have been working on these educational issues over a couple of decades, Porter noted, they can track larger patterns and educate one another on best practices.

“If the patterns in Washington six to 10 years ago are now unfolding in another state, they might experience the same call-and-response pattern, and they could learn from what we did,” she said. 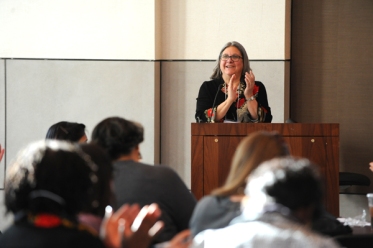 Learning from what others have done and gaining inspiration from it were the main themes of this summit, said organizer Margie Schaps, executive director of Health and Medicine Policy Research Group. Last year’s Midwest ACES summit in Milwaukee energized her about the potential work that could be done in Illinois and elsewhere.

“That was the impetus for us to think. ‘Let’s reconvene as many of those folks as we can, to see if we can stimulate those ideas collectively, or in our states,’ ” she says. “That’s exactly what happened. We had many, many new people this year, including more from Illinois, as we expected. Part of our agenda was to connect people who know about ACEs. To me, it was a success on all fronts. What I heard from a lot of people is that, ‘It helped me refocus and gave me ideas to take back to my work, as well as potential collaborators.’ ”

For more information about the conference, including a list of speakers, videos, photo slideshow, and PowerPoint presentations about other trauma-informed projects, go to the 2015 Midwest Regional Summit on Adverse Childhood Experiences site.