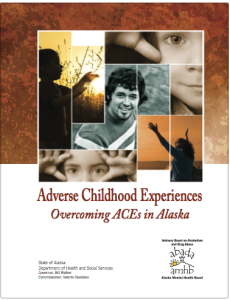 According to two sobering reports on the impact of adverse childhood experiences (ACEs) on Alaskans and on the state’s Native people, the prevalence of all of the eight ACEs measured was higher for Native Alaskans than non-Natives. Almost half of all Native Alaskans grew up with someone who had a substance abuse problem. The rate of sexual abuse is 32% among Alaska Native women, highest of any state’s ACE results. And the prevalence of four or more ACEs in the Native Alaskan community is nearly double that of non-Alaska Natives.

The reports give specificity to the health, economic, and social challenges that are widely recognized both in the general population and among Native Americans in the state. The data was derived from the optional ACEs module in the Behavioral Risk Factor Surveillance System (BRFSS) survey conducted for the first time in Alaska in 2013.

Because of the strong demand for the information, the Alaska Tribal Health Consortium released an “Executive Summary” of the ACEs data on Alaska Native (AN) people in advance of the broader report, “Adverse Childhood Experiences: Overcoming ACEs in Alaska,” by the Advisory Board on Alcoholism and Drug Abuse and the Alaska Mental Health Board (AMHB /ABADA ).

The report on Alaska Native people compared ACEs with the non-Native Alaskan population while the comprehensive report compared all Alaskans with a proxy for a national sample (data from the five-state CDC report.) The prevalence of all of the eight ACEs measured was higher for Native Alaskans than non-Natives and significantly higher for five of the eight ACEs. Almost half of all ANs live with someone with a substance abuse problem, compared to approximately 30% of non-Natives. Comparing state and national data, Alaska’s measured rates were found to be higher on all 8 ACEs than in those five-state totals.

There was a significant difference between the prevalence of 4 or more ACEs in Alaska Native people compared to non-Alaska Natives—27.9% in contrast to 15.5%. The survey of the entire Alaska population compared to a proxy for a national population revealed that 17.3% of Alaskans have an ACE score of four or more compared to 15.2% in the national sample. If the number of Alaskans with an ACE score of 4 were reduced to the level reflected by the national survey—meaning 11,500 fewer Alaskans with a score of four—there would a highly positive impact on “many health, economic, and social outcomes,” according to the report.

The Alaska Native report found a similar prevalence of ACEs among AN females and males (i.e., divorce, verbal abuse, witness to domestic violence) except for sexual abuse which is estimated to be 32% for females compared to 11.7% for males. The extremely high level of sexual abuse throughout the state is a matter of grave and long-term concern for public health officials and family advocates throughout the state. Dr. Linda Chamberlain, director of Alaska Family Violence Prevention Project, visits with women throughout rural Alaska who report widespread sexual abuse—an experience she says is the norm rather than the exception.

Alaska collected ACEs module data in 2014 and has committed to a third year of data in 2015. Patrick Sidmore, a planner with the AMHB /ABADA and the “go-to” person on ACEs in the state, said that there has been an overwhelmingly positive response to requests to support the multi-year surveys. Supporters include state agencies, private foundations, and the University of Alaska. The process of seeking funding from a variety of sources, according to Sidmore, helped to build statewide buy-in for the survey and create a commitment to act on its findings. Sidmore recently traveled around the state to present the state’s ACEs work and has encouraged the use of his slides and other materials by everyone in Alaska working on ACEs and resiliency.

For an overview of Overcoming ACEs In Alaska, go to the “Overcoming ACEs in Alaska” page of the Department of Health and Social Services and for other resources from the 2014 State of Reform meeting in Anchorage on ACEs, the future of health care in Alaska and other topics, click here.

Twenty-nine states and Washington, D.C., have done ACE surveys. The original ACE Study, first published by the CDC and Kaiser Permanente in San Diego, CA, in 1998, found a direct link between childhood adversity and the adult onset of chronic disease, mental illness, violence and being a victim of violence.