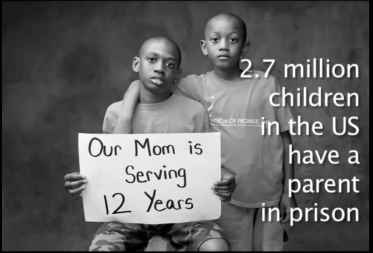 From a cellblock at El Reno Federal Penitentiary in Oklahoma on July 16, President Barack Obama, the first sitting president to visit a federal prison, spoke of his hope that his proposed criminal justice reforms will, among other positive outcomes, “perhaps most importantly, keep families intact.”

His historic visit to El Reno capped a week in which the president sought to “shine a spotlight” on the U.S. criminal justice system, which he said in a speech July 14 at the NAACP convention in Philadelphia is “particularly skewed by race and by wealth, a source of inequity that has ripple effects on families and on communities and ultimately on our nation.”

The day before his appearance at the NAACP convention, Obama granted clemency to 46 inmates, most of whom were incarcerated for non-violent offenses under mandatory minimum sentencing laws. In his speech in Philadelphia, the president said the mandatory sentencing laws for non-violent offenses are in large part responsible for the quadrupling of the number of people behind bars in the U.S. since 1980. He is proposing those mandatory minimum sentences be reduced or eliminated, allowing judges to use discretion in sentencing.

Obama noted that while the U.S. spends $80 billion every year to incarcerate 2.2 million people, there are also “costs that can’t be measured in dollars and cents.”

He pointed out that research shows that “people of color are more likely to be stopped, frisked, questioned, charged and detained,” and while African Americans and Latinos make up 30 percent of the U.S. population, they make up 60 percent of its inmates.

One of the consequences is that around one million fathers are behind bars, and around one in nine African-American children has a parent in prison.

These are questions that Sharon Content, founder and president of Children of Promise, NYC, can answer all too readily.

“It really is traumatic to a community,” Content said in an interview, “to have so many men not being able to contribute to the sustainability and the development of that community.”

Children of Promise, NYC, a community-based nonprofit located in Bedford-Stuyvesant, Brooklyn, provides after-school programming, a summer day camp and a mental health clinic to over 300 children of incarcerated parents each year.

Children ages six to 18 come to the agency after school for help with homework, mentoring and mental health services that are integrated throughout all areas of the program and which take into account the trauma the children have experienced.

Ayana, age 12, has been coming to the program since she was five, and says the staff at Children of Promise help her with her favorite subject, math, and give her a safe place to talk about the sadness and pain of missing her father who has been in prison since he was 19 years old — all of Ayana’s life.

His daughter will be 18 when he gets out. “My entire relationship with him,” Ayana said, “has been while he is in prison.”

In the seven years that Children of Promise has been in existence, serving over 1,000 children, Content estimates that as few as five parents of children in the program have been released from prison.

If mandatory sentencing laws are changed, as Obama is proposing, many of the children at Children of Promise could see their parents come home, Content said.

For parents who return home, Children of Promise provides them with concrete support and mental health services.

“We embrace them,” said Anna Morgan-Mullane, the agency’s vice president of mental health services. By providing therapeutic services and linking them with employment and educational programs, “we help them reintegrate back into their family…and come back into an environment they feel they’ve been cast out of.”

“There are so many layers of trauma involved in parental incarceration,” Morgan-Mullane said. “Many of our children witnessed the arrest, many were in the home when the things were happening” that led to the arrest.

Children of Promise staff receive monthly training on the effects of trauma on children and families impacted by incarceration. The trainings draw from the CDC-Kaiser Adverse Childhood Experiences (ACES) study so that every member of the staff understands the causes of why the children may act out, Morgan-Mullane added. First published in 1998, the ACE Study shows the connection between childhood trauma and adult onset of chronic disease, and mental illness, violence and being a victim of violence. Parental incarceration is one of the 10 types of adverse childhood experiences that heighten a child’s risk of negative outcomes in adulthood. (Got Your ACE Score?)

Unlike the sympathy a child receives when a parent has died or been deployed on a military mission or is living apart due to divorce, a child with an incarcerated parent often receives little to no support or empathy. Yet, Content said, these children are “dealing with the loss, depression and anxiety of not having their parent be part of their life as any child would.”

When she first started coming to the program, Ayana did not feel comfortable talking with anyone about missing her dad.

“I felt depressed,” she said. “Now I talk to my therapist and my friends here about how I feel. [Children of Promise] helped me visit my dad, and we write letters to each other.”

Content and other advocates have been speaking for years about the profound effects of parental incarceration on children, yet it has largely been what she calls a “silent statistic.” Obama’s recent remarks and actions are, she says, “finally allowing prisoners to have a voice, and a voice from the family’s perspective.”

While she is appreciative of the president’s granting clemency to dozens of individuals incarcerated under strict mandatory minimum sentencing laws, Content says the action is a “drop in the bucket”, given the thousands of others serving long sentences for similar offenses. Yet both she and the president expressed hope for the success of his proposed reforms due to bipartisan support in both houses of Congress.

Asked what she would say to President Obama as he works to change the criminal justice system, Ayana said she would ask that he “help parents not go away for so long so they don’t miss their children growing up like my father did.”

Melinda Clemmons is a reporter and marketing manager for The Chronicle of Social Change.