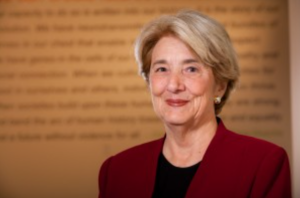 As the sounds of an abusive husband interrogating his partner intensify off-screen, a camera pans up a flight of stairs.

A young boy, maybe 3, sits in knitted pajamas at the top of the staircase, cradling a plastic yellow truck. He listens intently as the sickening cacophony grows, while his parents’ shadows dance off the walls.

Screams and shouts turn to tears and pleading before the sharp crack of a blow reverberates throughout the house.

Though we never the see the punch, the impact is clear. The boy drops the toy truck, and the camera follows the boy’s stunned and searching face as the screen goes black.

This 30-second “There’s No Excuse for Domestic Violence” ad first ran in the summer of 1994, part of the first national public service campaign aimed at preventing domestic violence.

For longtime domestic violence advocate Esta Soler, the ad that her organization helped produce represents both a historic achievement in the drive to halt domestic violence and a trenchant reminder of the current struggle to recognize and prevent child trauma.

“That little kid on the stairs tells that story really clearly,” Soler said in a recent interview with The Chronicle of Social Change. “We’ve actually been talking about child trauma and exposure to violence in the home going back to the very beginning of when we started to do this work.”

In 1994, when the arrest of footballer and screen celebrity OJ Simpson drew unprecedented attention toward violence against women, Soler sat ready, armed with well-produced television ads and the stories of victims of domestic violence that would enter the zeitgeist at just the right moment to drive sweeping policy reform.

Soler’s savvy, media acuity and ability to organize a diverse coalition were a major force behind the passage of the 1994 Violence Against Women Act, the first federal response to domestic violence. The organization she founded more than 30 years ago—now known as Futures Without Violence—continues to play a pivotal and prominent national advocacy role around breaking the cycle of violence against women and children.

Now, Soler and her organization are putting the issue of child trauma in their crosshairs, a development that could lift the Adverse Childhood Experiences study and “trauma-informed practices” from grassroots and academic circles into the heady arena of national policy.

In May, the San Francisco-based Futures Without Violence introduced a far-reaching slate of policy recommendations through its Healthy, Safe, and Ready to Learn policy report, building on its experience providing technical assistance to the federal Department of Justice’s Defending Childhood initiative. Early next year, Futures will launch the Changing Minds campaign, an expansive public outreach campaign designed to highlight emerging brain science around childhood trauma for adults who come into regular contact with children.

With several prominent child-trauma initiatives afoot, Soler’s Futures Without Violence is forging a super coalition—including the American Psychological Association, National Association of School Psychologists, the National Parent-Teacher Association, YMCA of the USA and others—meant to shape public will at the national level.

Soler says that nearly a hundred groups across the country have signed on as part of the policy platform put forth earlier this year. And the Changing Minds campaign brings a similar multi-sectoral approach—a direct-marketing push aimed at professionals like superintendents, teachers, nurses, coaches and school counselors.

“We’re never going to solve this one agency at a time; it has to be a national effort,” Soler said. “The boots on the ground are really going to make a difference. We’re trying to give the groups that we’re working a national public policy lift.”

But, Soler says, having a coalition is only part of the equation when trying to replicate a comprehensive federal policy package like the one for the Violence Against Women Act.

“We need to tell the story that [child trauma] is not rare and it’s way too frequent,” Soler said. “The report that [former U.S. Attorney General] Eric Holder released with the Defending Childhood task force said that two out of three kids had witnessed violence over the last year. That’s a lot of kids. We’ve got volume we have to speak to, and urgency.”

But for Soler, the damage caused by adverse childhood experiences cannot be the last word in the child trauma narrative.

“We need to tell the story and the story isn’t the house is falling apart,” she said. “The story is about how we need to do some repair to the house.

“The brain science is really a critical component of opening the possibility to people that they can really make a difference. Victor Carrion’s research has shown that that we can reverse the adverse effects of child trauma. When you mention that, people really want to be a part of [the] Changing Minds [campaign].”

Soler says that the next step is to bring that message—urgency coupled with the possibility of reversing the impacts of adverse childhood experiences—into national policy.

A self-described policy nerd, Soler is aware of the challenges and opportunities presented by aiming for legislative strategy. Not surprisingly, a need for better data ranks high.

“If you’re going to ask the federal government to make significant investments in solving a social problem, you need to know whether or not we’re going in the right direction,” Soler said. “Data is the only way we can know if something is making a difference, or at least going in the right direction. Sometimes programs have unintended consequences, and they’re not good, and we need to know that, too. You’re not going to get significant policy with significant dollars unless there’s some data and evaluation attached to it.”

According to Soler, success in the battle to address child trauma will mean driving down the numbers of children who have been exposed to violence and other adverse childhood experiences. But it also means public support of programs that are effective at limiting the impact of child trauma.

“Home visitations was one of those programs with the Nurse-Family Partnership that really took a very specific strategy to reduce child abuse in America, and over time, they’ve shown that they have been able to do that,” Soler said. “That’s what we need to do for trauma, writ large.”

Not all of Futures Without Violence’s work around child trauma enjoys an easy comparison to Soler’s work around domestic violence. With fewer public service advertising slots available in prime-time television now, it’s much harder to obtain mass-media exposure now than it was 20 years ago, Soler recounted. And the fractious political climate in Washington, D.C., these days has made bi-partisan legislative efforts a lot more rare than they once were.

But Soler is unbowed.

“I’m a complete optimist,” she said. “We will keep on fighting the good fight. When it comes to fighting for our nation’s children, we’ve got to find the champions on both sides of the aisle. We will figure that out. If we wait until Congress is different under different leadership, that’s too late for a lot of kids. We’re just going to figure out how to do it.

Jeremy Loudenback is the child trauma editor for The Chronicle of Social Change. You can find him on Twitter here.