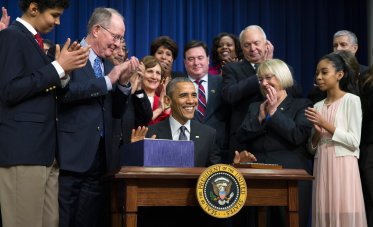 Legislation to replace the 14-year-old No Child Left Behind law—The Every Student Succeeds Act (ESSA) signed by President Obama on Dec. 10—was widely praised by the administration, legislators of both parties in the House and Senate, and the organizations concerned about education policy from the NEA to the Education Trust. The consensus is that the bill is not perfect, but provides a needed recalibration of federal authority over the states in education policy while protecting the most vulnerable schools, students, and communities. If carefully implemented at all levels of government, the major goals of the legislation have the potential to improve education for all students—including those from low-income families, those with disabilities and English learners.

There are many provisions in the new law that would qualify as trauma-informed, such as those to reduce over-testing and overuse of exclusionary discipline practices, as well as those that recognize the importance of early learning. There also are notable provisions that secure a specific foothold for trauma-informed practices.