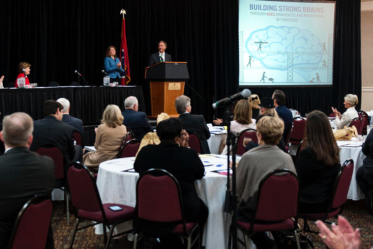 A little less than two years ago, a group of ACEs activists from Memphis came to a meeting of the Philadelphia ACEs Task Force and made a site visit to the 11th Street Family Health Services for “information and enlightenment,” according to Chris Peck, a member of the six-person delegation. Since then, these and other leaders in Tennessee are poised to take what they have started in Memphis statewide, demonstrating that ACEs research has the power to galvanize communities and even whole states to make fundamental changes to benefit children, adults, and families.

Peck, the state coordinator for the Tennessee ACE Project, described how the initial work in Memphis over the last decade began as a community-wide effort to address impact of poverty and multiple ACEs experienced by many residents. Community leaders had developed strong ties with Robin Karr-Morse, author of Ghosts from the Nursery; Dr. Vincent Felitti, co-principle investigator with Dr. Rob Anda of the CDC-Kaiser Permanente Adverse Childhood Experiences Study, and others in the trauma movement. They  became convinced early that innovative interventions were the way to go to get in front of the impact of ACEs. When we talked in Philadelphia two years ago, he noted that the city’s own traumatic history—being the place where Martin Luther King, Jr. was assassinated—is still relevant today.

The desire to tackle problems upstream led to the development of Universal Parenting Places (UPP), the product of a collaborative partnership between Baptist Memorial Hospital for Women and Knowledge Quest, where pilot sites were opened in 2015. The goals of UPP are to help families understand the impact of ACEs, reduce stress in children and parents, and provide skill building for effective parenting.

The prevention-focused parenting initiative in Memphis drew the interest of high level state officials, including Tennessee First Lady Crissy Haslam and Deputy to the Governor and Chief of Staff Jim Henry who participated in a major ACEs Summit in November. The summit marked the launch of a three-year statewide ACEs initiative led by the Memphis-based ACE Awareness Foundation.

Governor Haslam and Tennessee State Supreme Court Justice Sharon Lee also attended the summit along with about 200 others from academia, philanthropy, and private industry. After the summit, an ACE steering committee, comprising state officials from multiple sectors including health, labor, child welfare, and corrections, among others, was created. A second effort to bring together core leaders from the private sectors, including non-profits, is underway.

The ACEs steering committee will help implement prevention and intervention strategies in communities across the state and will develop a policy agenda that will consider the extent that state policies adhere to trauma-informed practices and will prioritize funding proposals to focus on early intervention rather than deep end costs such as incarceration.

An analysis of the cost of ACEs in the state has been persuasive in convincing policy makers of the wisdom of investing in the reduction of ACEs. As explained by Peck, an analysis done by Memphis Data Partners (ACE_ROI_May14) found that the lifetime costs to the state of Tennessee that are incurred as a result of a single child being exposed to 4 or more ACEs is $200,000. Earlier research on ACEs in Memphis suggested that at least 1,000 babies a year are born into environments where 4 or more ACEs are present. The $200 million lifetime costs associated with these children with 4 or more ACEs makes a strong economic case alone for reducing ACEs. Not so easily calculated or immediate but still compelling are the other benefits of reducing ACEs—increasing each person’s potential to succeed in life and reducing avoidable suffering.

A recent commentary in Forbes by the former Senate Majority Leader, Bill Frist, a physician, refers to this analysis as well as the findings from the Tennessee Behavioral Risk Factor Surveillance Survey (BRFSS) report. He applauds the work of Governor Haslam and the First Lady and says it “should be replicated. Strong leadership is crucial to raising awareness of ACES.”

The momentum continues to build in Tennessee to create a statewide movement that uses the science of communication about ACEs research to bring change in public policy, programs, and practices. The FrameWorks Institute, which has expertise in how to communicate research findings in public discourse on social problems, has been and will continue to be involved in the effort. Each piece of the movement in Tennessee—from the Universal Parenting Places to high-level symposia—is playing a critical role in the state.