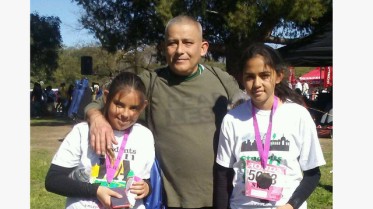 Fatima Avelica was riding to school in her father’s car when a traffic stop by immigration officers in northeast Los Angeles suddenly turned her world upside down.

In the car, 13-year-old Fatima sobbed as she pointed her cell phone camera at the windshield and shot a video that shows Immigration and Customs Enforcement (ICE) officers handcuffing and detaining her father, Romulo Avelica-Gonzalez.

A citizen of Mexico who has lived in the U.S. for 25 years, Avelica-Gonzalez had an order of deportation since 2014 according to a report from the Los Angeles Times.

“I was feeling scared and sad because I never imagined experiencing something like that in my life and because I’ve never been separated from my dad like that,” Fatima said in a recent interview. “I thought I was never going to get to see my dad again.”

The Migration Policy Institute estimates that nearly one in five children in Los Angeles County is U.S. born and living in a home with at least one undocumented parent.

Detentions and deportations of parents and other caretakers can leave lasting impacts on children. According to a brief from the American Psychological Association, parents’ “legal vulnerability, detention and deportation are strongly associated with depression, anxiety, fears of separation, social isolation, self-stigma, aggression, withdrawal and negative academic consequences among children.”

One of the more severe reactions to this kind of event is post-traumatic stress disorder (PTSD), said Marleen Wong, a child trauma expert at the University of Southern California’s Suzanne Dworak-Peck School of Social Work.

“The stress of seeing your parent detained and the uncertainty of what’s going to happen to him or her — will you be reunited? — that’s pretty stressful,” Wong said. “But does it reach the level of PTSD? For some kids, yes, and for other kids, no.”

The severity of trauma that a child experiences can depend on the presence of what Wong and other family psychologists call “protective factors.” These include support from family members and from community groups and the ability to see and communicate with the removed parent.

Ever since Avelica-Gonzalez was detained on Feb. 28 the community of Los Angeles has rallied to support the Avelica family and to stop Avelica-Gonzalez’s deportation by donating money and voicing support through social media, protests and fundraisers. Fatima’s school, Academia Avance, has hosted several media outlets to interview the family and co-organized an April 6 fundraiser for the family.

Interviews with the tight-knit Avelica family members show a closeness and supportiveness that helps maintain stability within the family. Fatima lives with her mother and two of her sisters: 12-year-old Yuleni and 19-year-old Jocelyn. Her oldest sister, Brenda, 24, lives separately and has her own family.

As the oldest sibling living in the home, Jocelyn said she helps to keep Fatima and Yuleni in good spirits.

“We never want them to just sit there and think about the situation,” Jocelyn said. “They’re still very, very young and in the delicate stage of their life, and right now is when they need to still focus on school and their sports.”

Ricardo Mireles, the director of Academia Avance, said both Fatima and Yelenia are excellent students whose performance has not slipped since their father’s detention.

In addition to providing emotional support, Jocelyn has changed her routine and taken on responsibilities that were once the purview of her father. Jocelyn said she now wakes up earlier and takes her two younger sisters to school before she heads off to a clinic where she works as a medical assistant.

In the afternoon, she picks up her nephew from school, something that her father used to do every day.

“I wanted to go back to school and continue with the whole medical field,” Jocelyn said. “I wanted to get higher, and that’s going to have to be on hold for now, until hopefully my dad gets out.”

Wong, the social work professor, said these kinds of disruptions are concerning.

“The concern we have about [this situation] is we don’t want to see 19-year-olds giving up their life goals to play a parental role entirely, although that’s very helpful to the family,” Wong said.

So far, the Avelica sisters and their mother have been in contact with Avelica-Gonzalez through daily phone calls, and some weekends they visit him at the detention center where he is being held in Adelanto, CA, Fatima said.

Supporting one another and speaking with their father – sometimes as they would if he were still in the home – helps the girls to cope.

“Whenever we’re together that just makes us feel better,” Jocelyn said. “And whenever my dad’s on the phone, we all stick together and just act as if nothing happened for just a couple of seconds.”

Holden Slattery is the distribution and engagement manager for Fostering Media Connections and a general assignment reporter for The Chronicle of Social Change.