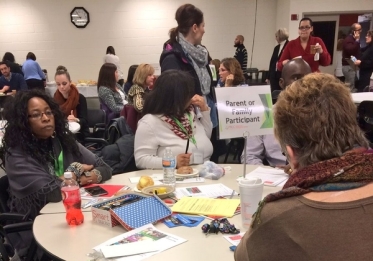 Participants at a Pottstown Trauma Informed Community Connection community meeting, which typically draw between 75 and 130 people. Courtesy of Valerie Jackson/PTICC.

When Suzanne O’Connor first joined the Philadelphia ACE Task Force (PATF)—a group then composed mostly of pediatricians who wanted to put ACE science into practice—she did more listening than talking.

“I wasn’t a doctor, I wasn’t a clinician, but a teacher trying to integrate trauma-informed care into early childhood education,” she says. “What struck me the most was what educators didn’t know about social services, mental health and even physical health. We didn’t have language for what we were seeing with kids who were particularly challenging.”

ACEs gave O’Connor that language. She became a passionate advocate for trauma training for early childhood and K-12 teachers. Now, as director of education for United Way of Greater Philadelphia and Southern New Jersey, O’Connor is helping trauma-informed practice to ripple across the region.

United Way, which recently honed its mission to focus on ending intergenerational poverty, funds and supports cross-sector networks in Philadelphia, surrounding counties and the borough of Pottstown, all part of United Way’s effort to “build a trauma-informed region.”

What O’Connor learned as part of the ACE Task Force informs her approach now: an emphasis on two-generation solutions to seemingly intransigent problems like poverty or homelessness. “There are reasons why a child can’t sit still and learn how to read,” she says. “There’s the whole family system. There’s ACEs. Our approaches are embedded in [the idea that] we need to understand the root cause.”

In 2018, United Way awarded three-year grants to PATF ($20,000 per year) and the Pottstown Trauma Informed Community Connection (PTICC; $50,000 per year), cross-sector networks that include community members along with organizational representatives from across education, juvenile justice, human services, law enforcement, philanthropy and public policy.

O’Connor noted that such networks foster a momentum and sense of shared mission that sustains the work over time. “People change jobs, but the same organizations keep coming [to the table],” she said. “The agencies are committed.”

Cross-sector networks also build relationships that help agencies make meaningful and timely referrals for clients who need help. “If child care centers have partnerships with neighborhood social service providers, that is a trauma-informed system…that is something very concrete,” she said.

“The community wasn’t ready to embrace it. When you first hear about ACEs, that’s a heavy weight, a loaded bullet for a small-town community that was working hard to overcome poverty, underfunding of schools and the stigma each brings,” Jackson says. But the school superintendent urged the group to take a second look at the research and its implications for Pottstown kids and families.

“The United Way funding has given us a wealth of education we did not have before. We use the funding to enhance professional development and to support targeted family engagement activities and behavior specialist services in our Pre-K Counts Programming,” Jackson says.

The grant helped PTICC to provide community education and parent training; it also supported the group in maintaining a website, presentations and print materials with the network’s essential messages: Connection matters. Belonging matters. Your story matters. The group’s quarterly community partner meetings draw between 75 and 130 people. “When this first started, people were skeptical. But it went from ‘what is this?’ to ‘I want more,’” Jackson says.

“[United Way] is invested in our community and willing to help address the goals of collective impact,” says Shannon Fitzpatrick Thomas, coordinator of children’s mental health for the Delaware County Department of Human Services. “United Way is like the root; all these organizations are starting to grow this beautiful trauma-informed tree and doing their own initiatives.”

Thomas credits her own “aha” to Lakeside Global Institute’s “Enhancing Trauma Awareness” course, funded by United Way, in which she watched a video of San Francisco pediatrician Nadine Burke Harris discussing the corrosive impact of early childhood adversity. “That video, that second, changed my life,” she says. “I realized that I was a victim of compassion fatigue. I didn’t know about self-care. It put everything into perspective.”

In Delaware County, United Way worked with Trauma Alliance members, along with students and faculty at Widener’s Center for Social Work Education, to develop an assessment tool for organizations to reflect and report on their use of trauma-informed practice in everything from crisis planning to staff supervision to self-care. Those assessments are the first step toward developing a resource guide to trauma-informed care in the county.

The $5,000 United Way grant supports a research assistant, says Margo Campbell, assistant professor and director of the bachelor’s in social work program at Widener, but O’Connor and her colleagues also provide perspective, information-sharing and reflection. “We really collaborated in terms of vetting the findings and figuring out where we can go from here,” Campbell says.

For O’Connor—no longer just a listener at the ACEs table—the question is how United Way can best guide and support the region-wide effort toward integrated, trauma-informed care. “We know people have a lot of ACEs; that’s not the story anymore,” she says. “The story is: Where do we go from here?”

To help answer that question, she goes back to the Philadelphia ACE Task Force, where she first learned about childhood trauma, brain development and resilience. “That work created a foundation for me and gave language to what I knew was happening in the child care center world, to be able to think about what systems change looks like with a trauma-informed lens.”

This article was originally posted January 15, 2019, on MARC.HealthFederation.org and was written by @Anndee Hochman, a journalist and author whose work appears regularly in The Philadelphia Inquirer, on the website for public radio station WHYY and in other print and online venues. She teaches poetry and creative non-fiction in schools, senior centers, detention facilities and at writers’ conferences.