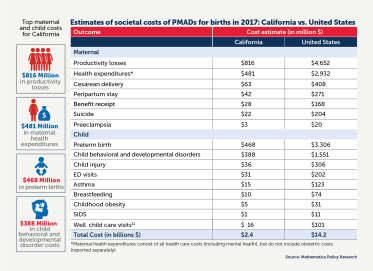 Melinda Coates experienced a tumultuous pregnancy. “I was really mentally upset literally from day one (of the pregnancy),” she says. (Melinda Coates is a pseudonym. To protect her and her children’s privacy and safety, we are not using her real name.)

Coates had hoped to get counseling last October, when she was seven months pregnant. That’s when she enrolled in the state’s Medi-Cal program, shortly after she and her abusive husband moved to California, “but nobody was able to get me in that quickly,” she says. “If I had gotten the help that I needed with my mental state, I may not have stayed in my abusive marriage as long,” she says.

Six weeks after her son’s birth she had one session with a counselor who prescribed an antidepressant. “I was supposed to go back, and I needed to reschedule, but I never heard from her again,” says Coates, who has been living in a domestic violence shelter since the end of June with her eight-month-old son and three-year-old daughter. She is currently separated and filing for a divorce from her husband.

A new policy in California that went into effect in July now makes it possible for pregnant women like Coates to get the counseling they need, according to a recently-released MediCal bulletin.

It will also reimburse providers for up to 20 counseling sessions for the year following childbirth, according to the bulletin. And it specifically states that it will allow any pregnant or postpartum woman in the program to receive that help if they experience “perinatal depression, a history of depression, current depressive symptoms (that do not reach a diagnostic threshold), low income, adolescent or single parenthood, recent intimate partner violence.” The new policy allows practitioners to bill for sessions that occurred from February 2019 forward. The policy is informed by recommendations from the U.S Preventative Task Force.

“For women who haven’t had any services in the past, it’s a great benefit,” says Allison Murphy, a psychotherapist and founder and executive director of Mothers Care in Petaluma, Calif. Previously, explained Murphy, women enrolled in Medi-Cal’s comprehensive pregnancy program were only entitled to counseling for up to two months following childbirth.

There is no question that many families suffer the consequences of perinatal depression and don’t get the help they need. Approximately 15 percent of women in California experience anxiety and depression during or after their pregnancy, according to a recent report by Mathmatica Policy Research. Many do not get treatment, resulting in missed work, and health and mental health consequences — not only for themselves, but also for their children — to the tune of $2.4 billion annually, according to the report, which calculated costs from birth to five years postpartum. (See the attached report below.)

And untreated perinatal anxiety and depression in mothers translates into adverse childhood experiences (ACES) for their children, says Murphy. “Unfortunately, somebody can be born with already having the vulnerability of a high ACE score, and so it is upstream to start working with someone directly during pregnancy and postpartum.”

Murphy is referring to the groundbreaking CDC-Kaiser Permanente Adverse Childhood Experiences Study that found remarkable links between 10 types of childhood trauma — such as living with a family member who is an alcoholic, mentally ill, or emotionally abusive — and the adult onset of chronic disease, mental illness, being violent or a victim of violence, among many other consequences. The study found that two-thirds of the more than 17,000 participants had an ACE score of at least one, and 12 percent had an ACE score of four or more. (For more information, see ACEs Science 101and Got Your ACE and Resilience Score?)

“And, of course, inter-generational trauma is transmitted from the very beginning from domestic violence and substance exposure, from stressors in utero on through (birth). And moms who are experiencing depression are less likely to build that resiliency in their children. So, it’s all around good to provide preventive services,” says Jennifer Silverstein, a licensed clinical social worker in private practice in Santa Rosa, Calif, whose caseload includes many women suffering perinatal depression.

That the Medi-Cal program will allow reimbursement for up to 20 sessions of counseling will likely encourage health care providers to ask questions they may have otherwise avoided, according to Dr. My-Le To, an obstetrician with Woodland Medical Clinic, part of Dignity Health in Woodland, Calif. “I think as far as giving the providers the opportunity to ask these questions — to ask how are things going at home, to screen for the depression — more providers will be less afraid of opening up a bottle full of worms,” says To. At her facility, patients are screened once during pregnancy, once when the baby’s born and once during a postpartum visit. If their screens are abnormal, they’ll be screened more often and referred to an onsite social worker, if needed.

“Once you start to ask about depression, that can take a whole hour, especially if she has other psycho-social factors going on at home and stressors. This will allow more time with patients and will allow us to bring them back more frequently to screen for [perinatal depression],” says To. That extra checking she says, is critical. For example, she explains when she prescribes antidepressants, she makes sure to schedule a follow-up appointment in two weeks to reevaluate. “Because it could get bad really quickly. You want to make sure you get a handle on the depression.”

While allowing Medi-Cal patients to receive help when they spiral down into depression or are crippled with anxiety, there are still barriers that get in the way of seeking treatment. One clear obstacle is a lack of providers to meet the need, according to Joy Burkhard, executive director and founder of the California-based advocacy group 2020mom.

Research by the Kaiser Family Foundation bears out Burkhard’s concerns. In California, only about 30 percent of the Golden State’s residents who need mental health care are able to get it.

But there are other big walls to getting treatment for perinatal depression, says Silverstein. “Definitely the biggest [barriers] are stigma and a lack of awareness about services on everybody’s part. And certainly prior to now, they would have a hard time to reach out in the first place and admit that they are depressed. There’s a lack of awareness about what normal postpartum looks like and when it crosses that line into abnormal.”

Stigma was also one of the reasons that Coates didn’t reach out for help when she needed it during her pregnancy. And she also witnessed how the strife in her marriage impacted her daughter who had delayed speech and was frequently up crying late at night. Now that she and her children are living away from her husband, she’s witnessed a complete change in her daughter.

“My daughter, who was speech-delayed, is speaking in full sentences, and she’s doing really well at preschool,” she says. “She’s a normal little girl, and sleeping every night at 8:30. She’s doing amazingly well.”