This year, a film named Audrie and Daisy was part of the U.S. Documentary Competition at the Sundance Film Festival and will be available on Netflix later this year. The film tells the stories of two high school girls in different parts of the country whose kinship is the result of a common tragedy: both girls were sexually assaulted by boys they thought were friends.

Both girls were tortured by their communities and schools, particularly over social media. Both girls tried to take their own lives. The film highlights our failures as a nation to protect our young people, it illustrates a fundamental misapprehension about gender-based violence, it demonstrates our inclination to blame victims rather than believe them, and it vividly depicts the power and pervasiveness of social media as a weapon.

END_OF_DOCUMENT_TOKEN_TO_BE_REPLACED 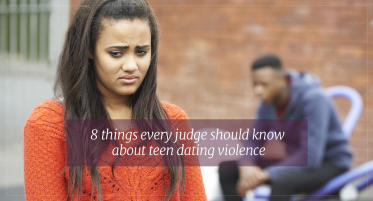 By the Hon. Marshall Murray
Judge of the Circuit Court of Milwaukee
Member of the National Council of Juvenile and Family Court Judges

One of the most important duties for any court system is to ensure that youth in the community are protected. As the former Presiding Judge of the Milwaukee Children’s Court and Presiding Judge of the Milwaukee County Domestic Violence Courts, I have seen many young people who were survivors of teen dating violence. They included children who were both male and female, heterosexual and LGBTQ, and from every ethnic background imaginable. It was, and is, very sad to me that while these children are supposed to be focusing on the challenge of adolescence, they were instead grappling