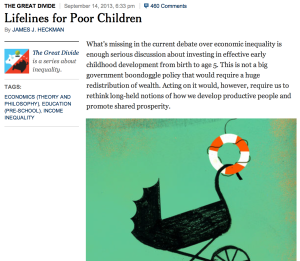 In a recent New York Times opinion piece, “Lifelines for Poor Children“, James J. Heckman, Nobel Laureate and professor of economics at the University of Chicago, makes a compelling case for quality early childhood programs for disadvantaged children that “more than pay for themselves in better education, health and economic outcomes.” But making these high-yield investments in children from birth to age five will require us, according to Heckman, “to rethink long-held notions of how we develop productive people and promote shared prosperity.”

Heckman points to two long-term research studies that have demonstrated high rates of return on investment: the Ypsilanti, Michigan Perry Preschool project and the Carolina Abecedarian Project, aka “ABC.” Both programs included cognitive stimulation as well as non-cognitive skill development such as training in self-control and social skills, and parenting practices. The Perry Preschool project showed that while the experience did not make lasting changes in children’s IQs as was expected, it did improve their overall, lifetime success in education, earnings and stability overall. The “ABC” project did show lasting effects on IQ as well as on parenting practices and

child attachment, “leading to high educational attainment and more skilled employment among the treatment group.” Heckman’s own analysis of data collected in the Perry Preschool project shows a return of six to 10 dollars in tangible benefit for every one dollar invested. There is a strong business case for early childhood programs that “foster human flourishing.”

Polling results cited by Heckman in the piece show strong public support for the federal government helping states build better preschools.  Other polling results featured at a U.S. Chamber of Commerce/Center for American Progress conference this summer found that the second highest priority for voters (the fist being improving the economy and creating jobs) was ensuring that children get a strong start with early childhood education.  A Washington Post blog on the conference reported that business leaders, bipartisan political leaders and policy wonks embraced early childhood education, convinced by the evidence of early learning on long-term outcomes and reinforced by new findings in neuroscience.

Heckman has made an enormous contribution to the public policy debate on early childhood programs by documenting the rate of return on investment, but his contribution extends far beyond that. In the Introduction to How Children Succeed, Paul Tough describes Heckman as the person at the hub of a new interdisciplinary network that has the potential to change “how we raise our children, how we run out schools, and how we construct our social safety net.” He convenes psychologists and economists to address questions about skills and traits that lead to success, how they develop and what interventions might help children do better.

The expanding knowledge base created by Heckman, his network of researchers, and others, will help chip away at the “unfounded doubt” that he sees as one of the two obstacles to moving forward.  The other obstacle—fear of doing things differently—may be more difficult to overcome.  As Ronnie S. Stangler points out, in his letter to the editor in response to Heckman’s piece, the fall-off in neuroplasticity in the brains of members of Congress makes integrating new ways of thinking and doing much more difficult for them than the very young children whose futures are dependent on their votes.

A second letter to the editor, from Kendra Hurley of the Center for New York City Affairs, the New School, laments the lack of funding for mental health programs that are needed to prevent more costly, invasive interventions later in life.  The New School report she mentions in the letter, Baby Steps:  Poverty, Chronic Stress & New York’s Youngest Children, addresses the impact of toxic stress on young children, describes the characteristics of children in foster care, and features promising programs that involve parents as partners.  The report also makes specific recommendations for the children of New York City.  An event on Oct. 4  focused on the findings of the report, featuring a keynote address delivered by  Dr. Jack P. Shonkoff of the Harvard Center on the Developing Child. A video archive of the event will be available.

The President’s early childhood initiative contains many of the programs that are known to be high-impact and cost-effective but have little chance of being enacted or funded in the current polarized and deficit-possessed environment.  [The web site as of this writing includes a disclaimer that it may not be up to date because of the government shutdown]. But in this leadership vacuum, there are bright lights of innovation in states and communities across the country where business, philanthropy, academia and child advocates are working toward a common goal to “foster human flourishing.”