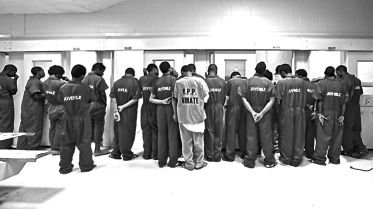 Juvenile offenders in Florida have starkly higher rates of adverse childhood experiences (ACEs) than the population as a whole, according to a study conducted by the state’s Office of Juvenile Justice and Delinquency Prevention and the University of Florida.

The study — The Prevalence of Adverse Childhood Experiences (ACE) in the Lives of Juvenile Offenders — is the first in the U.S. to look at the extent of ACEs among youth offenders. In the 64,329 Florida juvenile offenders surveyed, only 2.8 percent reported no childhood adversity, compared with 34 percent from the original Adverse Childhood Experiences (ACE) Study conducted by the Centers for Disease Control and Prevention and Kaiser Permanente, San Diego, in 1998 . The CDC’s groundbreaking epidemiological study discovered a link between childhood adversity and the adult onset of chronic disease , mental illness, violence and becoming a victim of violence.

The 10 adverse childhood experiences measured in the Florida research and the CDC’s ACE Study were: emotional, physical, and sexual abuse; emotional and physical neglect; and five types of family dysfunction: witnessing a mother being abused, household substance abuse, household mental illness, losing a parent to separation or divorce, and having an incarcerated household member. 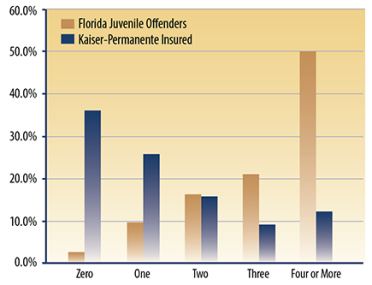 Half of the Florida juveniles reported four or more ACEs, compared with 13 percent of those in the CDC’s ACE Study. This is significant because, compared with people with zero ACEs, those with four ACEs are twice as likely to be smokers, 12 times more likely to attempt suicide, seven times

Prior research has shown higher rates of certain individual types of trauma among juvenile justice-involved youth than in the general population, which has led the Department of Juvenile Justice to incorporate trauma-informed practices into many of its programs. These are practices that create safe environments for youth to avoid re-traumatizing them, and to facilitate participation of trauma survivors in the planning of services and programs.

This study, which appeared in the Spring 2014 issue of the Journal of Juvenile Justice, provides evidence to support that effort and has garnered interest within the state government, and academic and child advocacy communities. 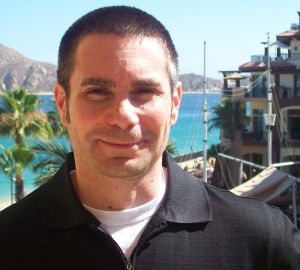 “The youth who had been referred to the juvenile justice system had markedly higher prevalence rates than those individuals in the original (ACE) Study,” says Dr. Michael Baglivio, a co-author of the study and senior management analyst at the Department of Juvenile Justice. “This shows that youth in the juvenile justice system were indeed victims of child abuse, neglect, and dysfunctional homes prior to, or at least current with, being ‘offenders.’ ”

“Naturally, it doesn’t require a great deal of imagination to draw the link between many sorts of delinquent behavior and an adverse childhood,” said study co-author Nathan Epps, senior analyst at the Florida Department of Juvenile Justice Research & Planning Bureau. “But this study was an opportunity to support that intuitive connection with solid data.”

Youth in the Florida study were counted as having an ACE if they had even once reported the experience, to allow for the fact that, for example, youth might be reticent to acknowledge an experience like sexual abuse and could underreport it, says Dr. Nancy Hardt, a co-author of the study and professor in pathology and obstetrics-gynecology at the University of Florida College of Medicine. 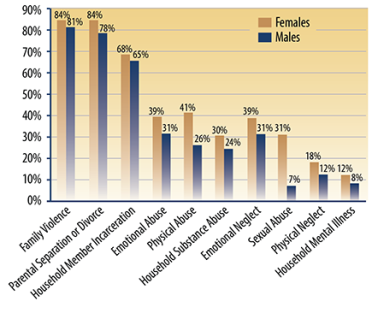 The Florida study showed higher rates of all 10 ACEs in girls than in boys, with an average composite score of 4.29 ACEs for females and 3.48 for males. Nearly half (45.1 percent) of girls reported five or more ACEs compared with 27.4 percent of boys. Among the 10 ACEs studied, family violence (84 percent for females, 81 percent for males), parental separation or divorce (84 percent, 78 percent) and household member incarceration (68 percent, 65 percent) were most common. The least common were household mental illness (12 percent among females, 8 percent among males) and physical neglect (18 percent, 12 percent). The biggest contrast between the genders was sexual abuse, at 31 percent for girls and 7 percent for boys. 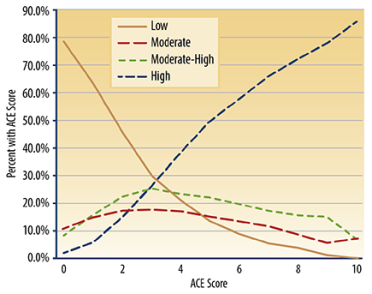 The study also showed a greater risk to reoffend among those with higher ACE scores. Those considered to be low-risk based on the department’s Positive Achievement Change Tool (PACT), a risk/needs assessment of a youth’s overall likelihood to reoffend, were far more likely to report somewhere between zero and three ACEs, while those considered high-risk based on the PACT measure were more likely to have ACE scores above three—and comprised more than three-quarters of those with ACE scores of either nine or 10. 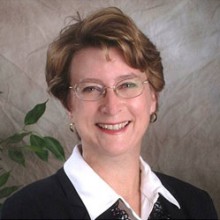 Hardt notes that the researchers attempted to figure out which ACEs were most predictive of involvement in the juvenile justice system. They determined that domestic violence and parental separation, including divorce or never-married, “were the two things that seemed to place youth at the highest risk of getting in trouble with the law,” she says.

The study notes that a focused effort on early identification of ACEs and intervention to improve a youth’s life circumstances could reduce the likelihood of criminal activities and the resulting costs to the system. The researchers suggest:

“Suspending or expelling students from school may deprive youth of the safest environment they can access,” the study says. “In-school programs to address bullying, disruptive behavior and aggression can help youth in safe environments while they learn regulatory skills. Law enforcement and judicial awareness of ACEs will enhance the likelihood that the root causes of problematic behaviors will be addressed with social and behavioral health services.”

Prevention and early identification of ACEs will improve general health and reduce costs in medicine, social services and criminal justice, the study says. “Development of educational curricula, health programs, and policies to detect and treat physical abuse, emotional abuse, sexual abuse and substance abuse among youth has the potential to reduce their involvement in the criminal justice system,” the authors write. “Increased primary prevention will require collaborative efforts and effective communication across health, education and community programs.”

By the time youth are incarcerated, they are beyond the point of such primary interventions and need secondary prevention and intervention through trauma-informed care, with the central precept of asking, “What has happened to you?” instead of “What is wrong with you?” the study notes. “The ACE composite score is precisely a measure of ‘what has happened to you,’ ” the authors say. “Juvenile justice systems should implement and reinforce [trauma-informed care] training for all staff.”

Finally, the gender differences in scores—juxtaposed with females’ lower rates of delinquency—show the need for gender-specific intervention strategies since males tend to lash outward, while females “have more internalizing behaviors, mental health symptoms, and self-mutilation,” the study notes. “The justice system may be reluctant to intervene with females until they have reached a higher threshold of delinquency.” 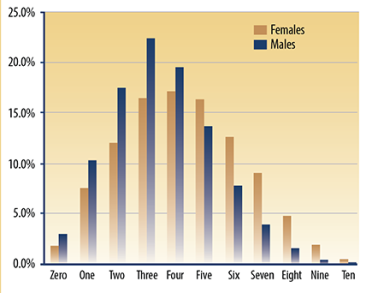 The Florida study will help prod these conversations forward, Baglivio believes. “We are only beginning to explore ACEs in the lives of these at-risk youth and look forward to examining which interventions and services best mediate the effects of ACEs, and what dosages are essential to reduce the harmful effects of prior adverse childhood experiences, if reducing those effects is indeed even possible,” he says. “Awareness through education of the public and screening of youth in various contexts and prevention of such adverse experiences in the first place appear to be promising avenues until empirical research can document the ameliorative effects of any intervention.”

Hardt says other juvenile justice criminologists and researchers have been inquiring about the data set, and she adds that in north-central Florida, where she’s based, juvenile justice and law enforcement authorities have been “reaching out in their communities to other services providers, to create this notion of a trauma-informed community. … The community understands that when children exhibit asocial behaviors, it’s better to address the root causes than treat them like little criminals.”

Schools see this asocial behavior long before criminal justice becomes involved, Hardt says, while parents label such youth as hard to discipline. “It’s time for justice, law enforcement, health and schools to all get together on behalf of these children who are experiencing ACEs,” she says.