November 21, 2014 By The Chronicle of Social Change in Uncategorized Leave a comment 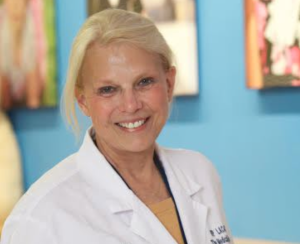 The Katie A. v. Bonta lawsuits leveled California and Los Angeles County with the charge that every county in the state provide adequate mental health services for some of its most vulnerable children.

END_OF_DOCUMENT_TOKEN_TO_BE_REPLACED 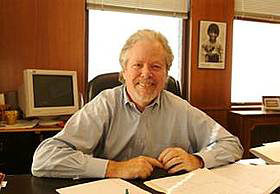 In Katie A. v Bonta, a class-action lawsuit over mental health services for children involved in California’s child welfare system, Los Angeles County settled with plaintiffs in 2003; the state settled on behalf of the other 57 counties in 2011.

Like most lawsuits and the settlements that stem from them, Katie A. involves lots of technical requirements. Counties must demonstrate that they assess and treat mental health using a core practice model that involves specified coordination and service delivery strategies.

But what it comes down to is this: Prior to the settlements, child welfare agencies in California were failing on both ends of the mental health spectrum.

END_OF_DOCUMENT_TOKEN_TO_BE_REPLACED

In 2002, lawyers representing foster youth in Los Angeles sued the county and California over its failure to service the mental health needs of children in or at risk of entering foster care. For years the mental health issues that these vulnerable children face were often ignored. The children who did receive treatment were frequently hospitalized when outpatient services would have sufficed.

Twelve years later, the clock has nearly run out on the settlements that stemmed from Katie A. v Bonta. On December 1, 2014, separate court settlements with the state and Los Angeles County could end.

Following is our analysis of what has happened since the settlement and where the state and Los Angeles could go next with regard to providing quality mental health services to children in need.

END_OF_DOCUMENT_TOKEN_TO_BE_REPLACED 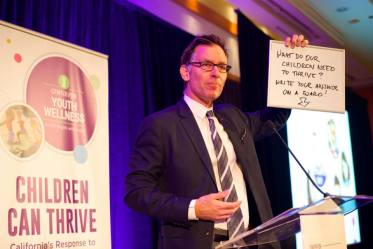 A three-day summit on Adverse Childhood Experiences, or ACEs, strengthens California’s efforts to orient policy and practice around preventing and responding to child trauma.

This statement is the kind of thing you’d expect to hear from a leader in education or child welfare, right? What if I told you instead that the person who said this is a leader in the criminal justice system? In

END_OF_DOCUMENT_TOKEN_TO_BE_REPLACED

Tucked into a curve of the Columbia River, which marks the watery border between Washington and Oregon, lies the small town of The Dalles. Its claims to fame include being a major Indian trading site for 10,000 years, a camping spot for Lewis and Clark in 1805, and the terminus of the Oregon Trail.

Now The Dalles is seeking a different kind of notoriety. This city of 13,000 is the first in the nation to seek certification from the Sanctuary Institute—a model of organizational change that challenges every part of the community to examine and remake itself through a trauma-informed lens.

Dalles (pronounced “dahl,” with a silent “s”) is a French word for “slabs” of rock around and over which the Columbia once roared.  The population of this rural community, 70 miles east of Portland, is mostly white, 30% Hispanic, and less than 10% other ethnicities. “It’s small enough that I’m able to call the chief of police and go out for coffee,” says Trudy Townsend, assistant to the superintendent of the North Wasco County School District 21.

END_OF_DOCUMENT_TOKEN_TO_BE_REPLACED 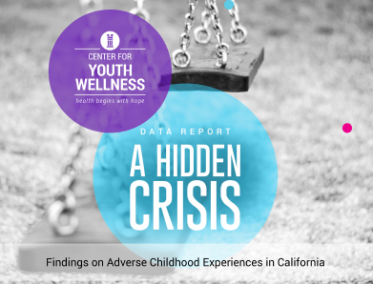 Nearly two-thirds of California adults have experienced at least one type of major childhood trauma, such as physical, verbal or sexual abuse, or living with a family member who abuses alcohol or is depressed, according to a report released today.

The report – “Hidden Crisis: Findings on Adverse Childhood Experiences in California” (HiddenCrisis_Report_1014) – also reveals the effects of those early adversities: a startling and large increased risk of the adult onset of chronic disease, such as heart disease and cancer, mental illness and violence or being a victim of violence.

Ten types of childhood trauma were measured. They include physical, sexual and verbal abuse, and physical and emotional neglect. Five family dysfunctions were also measured: a family member diagnosed with mental illness, addicted to alcohol or other drug, or who has been incarcerated; witnessing a mother being abused, an losing a parent to separation, divorce or other reason.

END_OF_DOCUMENT_TOKEN_TO_BE_REPLACED 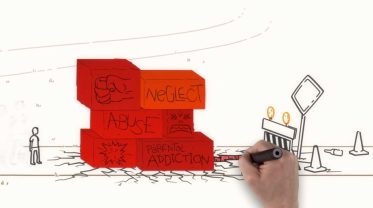 A cartoon outline of a child – in a video – stands alone near a cracked sidewalk heaped with obstacles: giant red bricks labeled “neglect,” “abuse” and “parental addiction.” The voice-over says: “It’s possible to fix some of the damage of toxic stress later on, but it’s easier, more effective and less expensive to build solid brain architecture in the first place.”

The four-minute animation—which covers toxic stress, caregiver-child interaction and the role of communities in building healthy brains—has reached many people since its release in October 2013. But the video is just one snippet of the Alberta Family Wellness Initiative (AFWI), a project aimed to better the lives of children and families in one of Canada’s westernmost provinces. 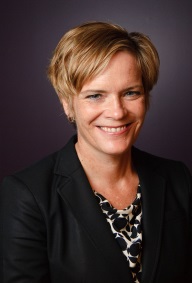 The AFWI, launched in 2007 by the private Norlien Foundation, has an ambitious agenda: to promote the use of scientific knowledge about early brain and biological development in order to change beliefs, policies and practices related to children, families and communities—in short, to “bridge the gap between what we know and what we do,” according to a 2013 AFWI report.

The AFWI began its work by capturing the attention and engagement of high-level “change-makers”—government officials, community leaders, policy experts, academics and administrators who could learn the newest science, discuss it in depth, then take that story home to influence research, policy and practice.

“In the early days, the focus of our effort was on policy-makers and professionals rather than the public. You need to start changing the thinking of those in the system who are making decisions before you start focusing on a public audience,” said Dr. Michelle Gagnon, vice president of Norlien.

AFWI focuses on the “core story of brain development,” a series of metaphors grounded in emerging biomedical science and developed with the help of the FrameWorks Institute  and the Center for the Developing Child at Harvard University.

END_OF_DOCUMENT_TOKEN_TO_BE_REPLACED

Sue Mackey Andrews will talk to anyone about adverse childhood experiences, or ACEs: Pediatricians. Early childcare workers. Parent advocacy groups. And those on the front lines who work with kids, like the longtime school bus driver from rural Maine, a gruff and taciturn man who insisted, during a half-day school district inservice, that trauma and resilience had nothing to do with his work.

The driver also told Andrews that he would not start the bus each day until he had made eye contact with every single child and greeted him or her by name. And that, Andrews responded, was exactly the relevance of his work to build resilience.

The tagline of the Maine Resilience Building Network (MRBN), which Andrews co-facilitates, is “Join the Conversation.” The 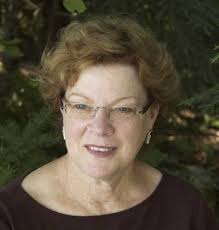 group, formed in the spring of 2012, brings together practitioners in medical care, education and behavioral health, along with those working in business, law enforcement, the military, juvenile justice and faith communities.

Since its early meetings, comprising a half-dozen people, all of them doing work based on research into childhood adversity, MRBN has grown to include 77 members, with reach into all of Maine’s 16 counties.

From the beginning, said Andrews and MRBN co-facilitator Leslie Forstadt, associate professor with the University of Maine Cooperative Extension, the group agreed that the message should focus on wellness and healing rather than illness and trauma.

The word “resilience” had to be part of the name because, said Andrews, “we talk about how it’s never too late to realize your ACEs and, through support and personal discovery, overcome them.” The term “building” captured the sense of a growing effort, and “network” aptly described how individual sites would function autonomously while sharing their innovations, challenges and questions.

The term “ACEs” has its origins in the CDC-Kaiser Adverse Childhood Experiences Study. The study revealed a direct link between 10 types of childhood adversity and the adult onset of chronic disease (cancer, heart disease, diabetes, autoimmune diseases, etc.), mental illness, violence and being a victim of violence. It showed that childhood trauma was very common — two-thirds of adults have