“I used to know how to fly,” says Bird, the main character in Bird That Wants to Fly, a children’s book written by child psychiatrist and artist, Dr. Diane Kaufman.

Bird walks wearily through her “sad and dreary” world of “blizzards and freezing rain and children with rocks and men with shot guns.” This trauma-sensitive tale tackles topics such as depression, violence and bullying in simple language. It offers a child-friendly take on post-traumatic stress that is both realistic and optimistic.

The illustrations by Olya Kalatsei add color, warmth and whimsy to the story. Bird That Wants to Fly has universal themes appropriate for all ages. Who hasn’t been grounded by exhaustion, sidelined by grief, or in need of support from others in order to soar higher?

Transforming trauma is the theme of this book and the story of the author’s life as well. Kaufman has spent decades making meaning, making art and making a difference. As a child, she wrote a composition in which she said she wanted to be a  “Medical Doctor” or a “Medical Drawer.”

Kaufman works as a psychiatrist for Morrison Child & Family Services in Portland, OR, where she moved in 2014 to be closer to her grandchild, daughter and son-in-law. Before moving, she worked as a psychiatrist for 28 years at the University of Medicine and Dentistry of New Jersey (now called Rutgers Biomedical and Health Sciences) where she helped launch Poetry and Medicine Day and was instrumental in establishing Creative Arts Healthcare at University Hospital and the Arts in Medical Humanities Initiative at Rutgers New Jersey Medical School.

Is it difficult to blend clinical and artistic work? I asked her.

“There is your role and how you are hired,” she said. “I’m hired as a child psychiatrist and my role and responsibility is psychiatric evaluations, diagnosis, medication treatment. The role of psychiatry has become narrowed, in my opinion, to medication. And while medication is absolutely useful and can be needed, there are other types of medicine. Art is medicine too.”

Families are generally receptive to her arts medicine approach.

“After I explain I’m a psychiatrist, what a psychiatrist does and my background, then I say, ‘I’m also an artist and a poet, I like creativity and lots of people are creative in different ways. How are you creative?’ And very often families will light up.”

“I see the arts as a special type of medicine for body, mind and spirit, hence, arts medicine,” she explained. “Arts medicine is a descriptor word phrase I put together to represent using the expressive arts (poetry and other forms of creative writing, music, dance, visual art, drama, etc) for health and healing purposes.”

“The number one priority is to meet your patient needs,” she said, “If there’s a psychiatric emergency, that’s not the time to write a poem. Maybe afterwards.”

However, the subtlety of story or metaphor is often useful to people working through trauma because “it can be hard to talk about the truth straight on.” because trauma can be overwhelming.

She recalls an Emily Dickinson poem, “Tell the truth but tell it slant,” which reads, in part:

“The Truth must dazzle gradually.”

Therapists can use it to introduce trauma-related topics such as fear, sadness, anxiety, numbness and isolation.

Readers might “draw and write at end of book,” in the blank pages left for that purpose so that children can “experience this healing story.”

Arts medicine won’t replace nitroglycerin, “if someone is having a heart attack,” she said, but it might promote relaxation, provide healthy distraction (especially for anxiety) and increase self-knowledge.

This seems like the type of insight only a poetic psychiatrist could have. One who works to create hope, health and possibility, for her patients and herself.Kaufman is one who takes her own medicine. Bird That Wants to Fly was written during an expressive arts workshop on identity and integration in which she was a participant. It came out “almost stream of consciousness” and needing almost no editing.

The book, published in 2013, keeps growing and expanding. It’s been “absolutely amazing,” says Kaufman, to see her words take flight. 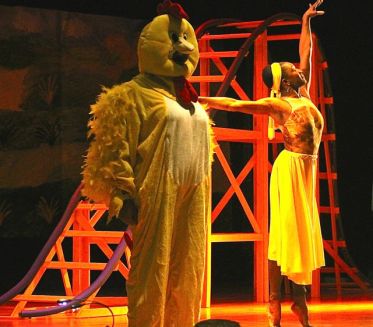 It was turned into a children’s opera, by composer Michael Raphael in 2014; performed by Trilogy: An Opera Company (TAOC) at Kennedy High School in Paterson, NJ, in 2015. Students from Central High School of Newark made artwork for the set and students from Paterson Public Schools performed with professional artists such as dancer Adrienne Armstrong, who has performed with Alvin Ailey American Dance Theatre; Kevin Maynor, the founder and artistic director of TAOC, who has done operatic performances in Carnegie Hall and The Bejing Concert Hall; and Pam Jones, who has performed with the Royal Danish Theatre.

Actor Danny Glover narrated the opera for a digital download. There is a non-narrated Kindle book available too.

Kaufman dreams of creating community-care events focused on themes such as trauma and grief (the subject of her next work) where a ballet or opera is combined with panel discussions, expressive art activity and resources sharing.

“On a personal level, art affirms a sense of one’s life purpose,” she said. “It provides meaning. I have a bit of a trauma history myself in early childhood. And my direction of my life has been around children, helping children, so I think that knowing that there’s a community out there that has joined forces together (around adverse childhood experiences) to protect children, on a personal level, is very nurturing.”

The entire opera performance can be viewed on Dr. Kaufman’s website.  The audio and opera are available to sample or buy, on Roven Records.