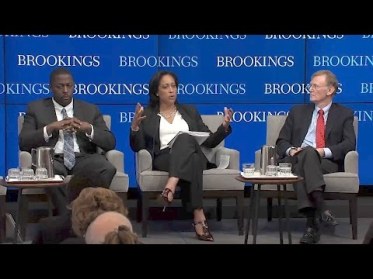 After decades of working at the national level on health and mental policy in Washington, DC, I find myself looking for ways to get involved locally—the closer to home the better, and the more tangible the work, the more gratifying. There has never been a better time to act locally, not just because of the polarized national scene, but because opportunities abound to really make a difference at the local level.

With this budding interest local involvement taking shape, I was eager see what lessons I could learn from a May 9th event titled “New directions for communities: How they can boost neighborhood health,” sponsored by the venerable organization The Brookings Institution, best known for leadership at the national and global levels.

Brookings has developed a series titled “Building Healthy Neighborhoods” that is exploring “the crucial elements to building a culture of health, education, and economic mobility in low-income communities.” Since my neighborhood has people of all income levels and has undergone rapid gentrification especially in the last decade, its diversity is a source of its vitality but also presents challenges in creating community. A number of the reports in the series provide ideas and strategies for addressing problems at the neighborhood level.

What I didn’t expect to hear at the Brookings meeting was the degree of interest by several of the presenters in the role that “villages” could play in improving community health. Villages are springing up around the country to help people “age in place” by addressing the multiple needs of seniors. Village members are both lending and receiving help.

Volunteers in the Mt. Pleasant Village meet to discuss the village’s participation in a study on social inclusion among its members. Pictured here (l to r) are Bonnie Cain, Kelly Callahan, Katie Tyler, Sharon Hart

The Mt. Pleasant Village is taking shape in my neighborhood—it is one of a dozen or so “villages” in DC and over two hundred across the nation, some with professional staff, some all volunteer. I connected first by joining a mindfulness meditation group that meets weekly and now by participating in a study sponsored by the DC Office of Aging on social inclusion. Another DC village is taking the lead on the study but several others, including the village in my neighborhood, are helping out.

My part in the study will be to interview other village members about how our village organization can provide opportunities for its members to meet and connect with others in the neighborhood. Participants from other villages will be doing the same. Based on research showing that being socially isolated is a significant health risk similar to smoking or drinking to excess, social inclusion is becoming recognized as a vital component of creating a culture of health in a community. 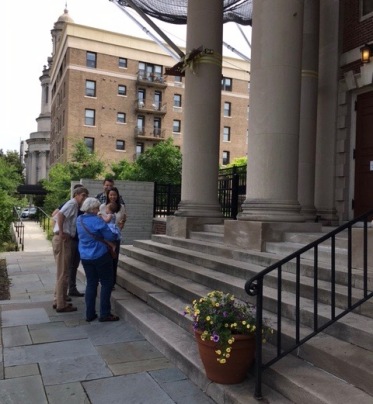 Family and friends gathering prior to service at All Souls Church in Washington, DC.

The message that social isolation is dangerous to your health was reinforced in a sermon delivered at my neighborhood church last Sunday by the minister, Rev. Rob Hardies, citing the work of Susan Pinker, author of “The Village Effect, ” who describes the research findings that being socially connected leads to longer, healthier lives and conversely, being alone without a support network leads to a shorter, less healthy life. In his sermon, “What I’ve Learned from the Dark,” Hardies observes that the more people are connected with others who understand their fears and struggles and share their values, the less likely they are to experience hopelessness, despair and cynicism.

Stuart M. Butler, senior fellow, Economic Studies at Brookings, a moderator of the May 9th event and a national expert on budget and healthcare issues, addressed the role that villages can play in improving health. Matt Brown, a nurse and geriatric nurse navigator, at Sibley Hospital in DC, suggested villages could play a role in reducing hospital readmissions. He said patients should be enrolled in villages to minimize the risk they face after being discharged from the hospital—a period he described as one of “high alert.” Subsidizing memberships in villages by hospitals could yield an immediate payoff—just one example of spending philanthropic and hospital dollars to build community connectedness.

One speaker recommended that village membership be part of the health insurance’s calculation of Pmpm (Per member per month capitation amount) and another suggested that Villages could provide useful information (with privacy protections in place) about its members to hospitals, for example, that could make transitions from hospital to home safer. Butler and Carmen Diaz wrote about villages in a blog as part of the Brookings Building Healthy Neighborhoods series.

Butler and Diaz also have written about the need for close collaboration of sectors including housing, health, and social services with “hubs” such as hospitals and schools providing a crucial focus (see “Hospitals and schools as hubs for building healthy communities”). Promoting collaboration among sectors, as well as how to blend and braid funding streams, were strategies discussed at the event to improve health and prevent health problems before they develop.

Butler, who grew up in the United Kingdom, told how his mother ran a post office and shared “intel” with the district nurse about residents of the town whose routine stops at the post office, for example, might have changed, signaling a potential health problem. This type of awareness of the rhythms of your neighbors and informal connections can be part of preventing problems in the first place and keeping them from worsening.

The meeting was transcribed and the webcast archived on the Brookings web site. Here’s a quick summary of some of the key points:
—The proportion of health spending as part of combined spending on health and social services is much greater in the US than in other countries. Spending more on social services could result in spending less on health care. For example, spending on home safety evaluations could prevent falls that alone cost $30 billion annually, according to the CDC.
—Budgetary and payment systems should be reformed to reward good outcomes, and rules and regulations that get in the way of making program improvements should be removed.
—Braiding and blending of public and private funds (e.g., social impact bonds) could improve collaboration and spur innovation. Managed care, pilots and demonstrations in the Medicaid program provide opportunities to look across sectors, broadening what constitutes health spending.
—Incentives are needed to stop “medicalizing poverty and other social problems.” Even with strong evidence that investing in nutrition or housing, for example, would reduce healthcare costs, it is difficult to move dollars from one program to another.
—Institutions such as hospitals need to substantially increase their investments in the community. One example of an incentive for additional investment is a requirement in the Affordable Care Act for non-profit hospitals to do community health needs assessments.