The cast and crew of Paper Tigers take a bow after a sold-out screening at the Seattle International Film Festival.

Three years ago, the story about how Lincoln High School in Walla Walla, WA, tried a new approach to school discipline and saw suspensions drop 85% struck a nerve. It went viral – twice — with more than 700,000 page views. Paper Tigers, a documentary that filmmaker James Redford did about the school — premiered last Thursday night to a sold-out crowd at the Seattle International Film Festival. Hundreds of communities around the country are clamoring for screenings.

After four years of implementing the new approach, Lincoln’s results were even more astounding: suspensions dropped 90%, there were no expulsions, and kids’ grades, test scores and graduation rates surged.

But many educators aren’t convinced. They ask: Can the teachers and staff at Lincoln explain what they did differently? Did it really help the kids who had the most problems – the most adverse experiences? Or is what happened at Lincoln High just a fluke? Can it be replicated in other schools?

Last year, Dr. Dario Longhi, a sociology researcher with long experience in measuring the effects of resilience-building practices in communities, set about answering those questions.

In case you don’t know Lincoln High School’s story, here’s a quick summary: In 2010, Jim Sporleder, then-principal of Lincoln High School, learned about the CDC-Kaiser Adverse Childhood Experiences (ACE) Study and the neurobiology of toxic stress at a workshop in Spokane, WA. The ACE Study showed a link between 10 types of childhood trauma and the adult onset of chronic disease, mental illness, violence and being a victim of violence. The Children’s Resilience Initiative (CRI) organized a group of 30 people from Walla Walla, including Sporleder, to attend the workshop in Spokane. CRI is a community organization in Walla Walla that creates awareness about childhood adversity and encourages all sectors of the community – business, faith-based, corrections, law enforcement, education, etc. — to integrate trauma-informed and resilience-building practices.

Severe and chronic trauma (such as living with an alcoholic parent, or watching in terror as your mom gets beat up) causes toxic stress in kids. Toxic stress damages kid’s brains. When trauma launches kids into flight, fight or fright mode, they cannot learn. It is physiologically impossible.

They can also act out (fight) or withdraw (flight or fright) in school; they often have trouble trusting adults or getting along with their peers. They start coping with anxiety, depression, anger and frustration by drinking or doing other drugs, having dangerous sex, over-eating, engaging in violence or thrill sports, and even over-achieving.

Sporleder said he realized that he’d been doing “everything wrong” in disciplining kids, and decided to turn Lincoln High into a trauma-informed school.

With the help of Natalie Turner, assistant director of the Washington State University Area Health Education Center in Spokane, WA, Sporleder and his staff implemented three basic changes that essentially shifted their approach to student behavior from “What’s wrong with you?” to “What happened to you?”

Two years into the new approach, CRI brought in Laura Porter, co-founder of ACE Interface and former director of the Family Policy Council in Washington State, to work with Lincoln High teachers and staff to find out exactly what they were doing differently. They came up with four sets of new, interrelated practices:

In Spring 2014, Longhi surveyed 111 students for their ACE scores AND resilience scores, and obtained attendance, grades and test scores from school records. The survey also asked students to reflect on their school and life experiences since coming to Lincoln High. (You can download the report from the Children’s Resilience web site.)

The four types of students’ experiences, related to the practices that teachers and staff put in place, included:

The results? “Resilience trumped ACEs among students who had gained resilience at Lincoln High,” says Longhi. “Resilience completely moderated” the negative impact of ACEs on students’ grades and test scores.

Although it measured a very small group (111 students) from only one school, this research is an important first step in measuring resilience and evaluating how resilience-building practices can help kids who have high ace scores perform better in school.

To give you an idea of what the differences were between a students who had little or no resilience, and those who had high resilience, here’s a description from the report, in the teens’ own words.

Teens with no or low resilience say:

Yes, I struggle with anger and depression

The teens who have developed high resilience and are thriving say:

The biggest change has been

My proudest moment was

My school and future plans are

But what about the 30 percent of the students for whom the changes at Lincoln made little or no difference?

“I don’t think we can answer that from this work,” says Teri Barila, director of the Children’s Resilience Initiative. She offers an educated guess: “The impact trauma has on creating negative talk, negative scripts, negative outlook, is strong, and helping a student shift from that sense of failure is not easy.”

What’s useful to understand about Lincoln High School ‘s new approach is the context in which it made those changes – in particular, the large role the community played. The Children’s Resilience Initiative and its many partners made a concerted effort to educate the community of Walla Walla about the new knowledge about human development, how punishment really doesn’t help children learn, and how building resilience can give children hope and opportunity. They worked closely with the school to develop supports for students, including after-school classes and special services. The development of the Health Center, the clinic adjacent to the school, was the result of a community effort.

Barila and Longhi recently presented a strategy paper to Walla Walla school administrators. In it, they say:

Research shows that starting earlier, at younger ages, with trauma-informed practices in schools, with community-wide supports, leads to better results….Adding new programs focused on students may not be enough to break the intergenerational cycle of ACEs. Breakthrough impacts…can only come from collective impacts of changes in adult caregivers, including teachers and parents, and in the communities where students live.” 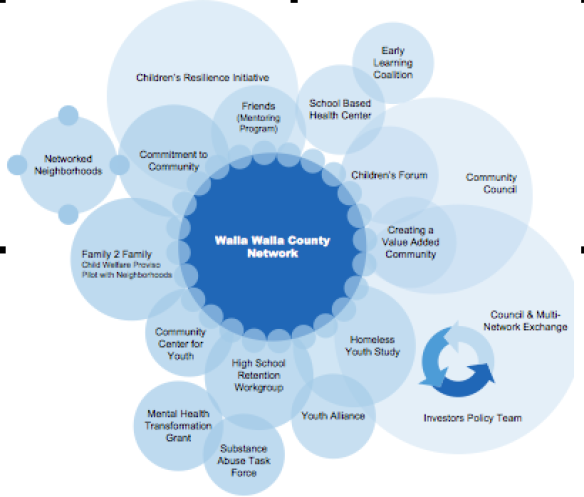