Secrets erupt on page after page from people who are pictured on Project Unbreakable, long-held secrets in the words on the posters they’re holding. Words that fathers and step-fathers and grandfathers and mothers and brothers and boyfriends  and dates and acquaintances said while abusing or raping them. “Now…Tell me you love me,” says one poster. “It is not going to hurt if you just relax,” says another. 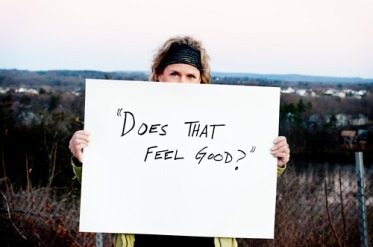 The words make the unthinkable chillingly real: “Can I write you a check to keep you quiet?” “No one is going to believe you anyways.” “Does that feel good?” “Stop struggling. You’re only hurting yourself.” “No puedes decir a nadie – es nuestro secreto.” (“You can’t tell anyone. It’s our secret.”) “This is a test. If you tell Mom, we’ll both know you can’t be trusted.” “I wish you were a girl.”

Project Unbreakable is art and art therapy, says Grace Brown, 19, a freshman at the School of Visual Arts in New York City. She launched the site in October 2011. “It just blows my mind that I’m able to do this,” she says. “I’m able to use my art and the thing I love the most to help people begin to heal or continue their healing or complete their healing.”

This is how Project Unbreakable works: People write words they remember their abuser saying on a poster, and Brown photographs them holding the poster. Each chooses to reveal none, some or all of her or his face. Some add information about the abuse on the site. Others say the words are enough. Some know the exact words they want to write, do so quickly and are finished. Others struggle, cry and want to talk.

Brown’s mentor, Yvonne Moss — an incest survivor, advocate and Brown’s “New Jersey mom” — says the project is a way for people to take back the power of the “words that were once used against them.” So far, Brown has photographed 25 people herself. About 100 people have submitted their own photos. Dozens of submissions are waiting in a queue to be posted.

The project was born last Fall. Brown had been working on a photo project called 50 Extraordinary Women when a friend revealed her story of sexual abuse. The next morning, a Sunday, Brown woke up with the idea for Project Unbreakable. She began planning the site that day, started doing photographs that week, and launched the site a week later. In November, it gained momentum when two feminist sites mentioned it and Yvonne Moss posted about it on her blog.

In the last few days, The Guardian published a short post, Brown did an interview via Skype with a TV reporter in the Netherlands, another interview via email with a Washington Post reporter, and a phone interview with a blogger in Britain. Ten to 20 submissions from around the world pour into her inbox every day.

“I had no idea this would happen,” she says. “Because it’s such a controversial thing, I was really scared. I was worried that people would think it was a negative thing. I’m completely shocked and amazed at what it’s gotten to.”

Grace Brown and her own poster

It’s not surprising. The National Center for Victims of Crime says that one out of four women and one out of six men experience sexual abuse before they are 18 years old. The U.S. Centers for Disease Control and Prevention’s ACE Study (adverse childhood experiences) found similar results. That works out to about 45 million adults in the United States alone. And tens of millions more worldwide. It’s safe to say that most of those people don’t talk about the abuse for years, if ever, and even when they do, they’re ashamed, as if they were to blame, and not their abusers. The traumatic experiences leave many living with post-traumatic stress disorder; many attempt to escape the memories by turning to alcohol, food, sex, smoking, risky activities or work for relief.

“I knew it would strike a chord,” said Moss, 57, who was the first to be photographed showing her face. When she was five, her stepfather began molesting her every night for five years. When she was 10, he began raping her. “I didn’t realize the extent of where the project was going to go until the day that my picture launched. When she posted my picture, I blogged about it. Within 24 hours I had 800 hits on that post. If my blog was getting that much, hers had to be getting more.”

Seeing Moss show her face inspired others to show theirs, including Brown, who relates her experience with her grandfather. “I’ve been surprised at how many young women show their faces,” Moss says. “I wouldn’t have done that at their age.”

Of the women and men who are willing to show their faces, it’s their expressions that stop you cold — rage and grief wrapped in defiance. Some add their own words to echo their expressions:

Rape and abuse is vile and isn’t confined to women victims. I think every single poster abuser quote held up by the brave participants has been said to me after getting ass raped or having to perform oral sex on my Father from the age of six until I left home as a teenager. I never did tell and he never did slit my throat or kill himself. At certain times I wished he had. Not now. Thank you.

I refuse to hide anymore. If anything is owed, coming out of hiding is what I owe myself. I’m not afraid. 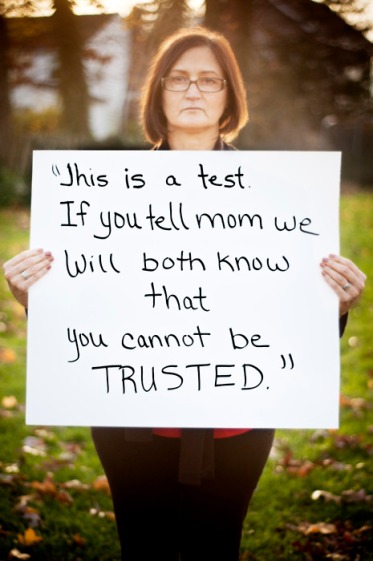 For others, it’s a chance to ask questions:

I was brought to tears going through this blog, it breaks my heart. These people are so strong. I have a question though, is it rape if only fingers are used? And if I didn’t explicitly say “no”?

I don’t know what happened to me. I’m not even sure something did happen to me. I keep thinking I’m exaggerating, but my instincts tell me something’s off. I think something happened, I’m not sure when, I’m not sure how. I realized that when an older man told me I was beautiful and he was fascinated with me (I was eighteen years old, he was forty) and I suddenly burst into tears. That had never happened to me. I felt something was off, I felt scared that something would happen again – but what?

With her years of wisdom and perspective, Moss has recently taken on the role of tackling these questions. She mostly assures them that they’re not crazy; that their feelings and experiences are real; that if they did not consent, the experience was abuse or assault; and that it’s a good idea to see a counselor.

She thinks Brown has hit a nerve because something like this would not have the same power if it was done in a therapist’s office. “Because her project is strictly an artistic format,” says Moss, “that’s what’s been so empowering. It’s not a ‘I’m sick and I need help’ format. It’s a completely artistic project and it gives people the freedom to have their voice be heard.”

“I’m not out to fix anyone,” says Brown. She sees value in talk therapy, but regards this kind of art therapy as having the potential to reach and create a community of people who no longer feel alone and isolated. “The combination of the two can be powerful.”

Brown is planning photo sessions in other cities. One is scheduled for March 3 in Washington, D.C. She’s had invitations from people in other countries, and soon will be doing fundraising on IndieGoGo so that she can take her project to all the places in the world from which she’s received invitations.