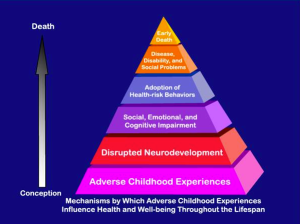 It’s terrific to see the CDC’s ACE Study, neurobiological research on children’s brains, and trauma-informed practices featured on Salon (Is Your Kid an Addict?) and by David Brooks in his column, The Psych Approach. Just terrific. The more information out there, the better.

Brooks uses Paul Tough’s book, How Children Succeed, to discuss the “psychologizing of domestic policy”. What he means by that is moving from “the material and bureaucratic things that correlate to school failure” (e.g. poverty, school class size) to “the

psychological reactions that impede learning — the ones that flow from insecure relationships, constant movement and economic anxiety.”

When you look over the domestic policy landscape, you see all these different people in different policy silos with different budgets: in health care, education, crime, poverty, social mobility and labor force issues. But, in their disjointed ways, they are all dealing with the same problem — that across vast stretches of America, economic, social and family breakdowns are producing enormous amounts of stress and unregulated behavior, which dulls motivation, undermines self-control and distorts lives.

Maybe it’s time for people in all these different fields to get together in a room and make a concerted push against the psychological barriers to success.

He’s obviously struck a nerve with this column. At this time (11 a.m. PT), 360 comments appear on his post, and comments have been cut off for more than an hour. Comments are still being posted, but it’s obvious that the comment approvers are still catching up with the response. (My three-part comment was just posted, out of sync….that’s what I get for being long-winded!)

A lot of the commenters focus on Brooks’ psychological theme. BUT….that’s only part of the story. There’s much more to this than psychological barriers. I wish he’d added this information to why childhood trauma has such tragic long-term consequences:

So children with toxic stress have trouble focusing in school, developing healthy relationships with their peers and trusting authority. They cope with their high anxiety, depression, and fear by turning to biochemical coping strategies — e.g., alcohol, tobacco (nicotine relieves anxiety), methamphetamine (now illegal, but it was the first prescription anti-depressant), food, and even work. Addictions to these lead to emphysema, lung cancer, diabetes, heart disease, stroke, autoimmune diseases, etc.

Other research is revealing how stress hormones produce systemic inflammation through the body that lay down the foundation for later disease. Epigenetics is showing how the social environment turns genes on and off, and how the consequences of adverse childhood experiences can be passed from one generation to the next.

The good news is that, as Tough notes in his book, there’s a lot of work being done in resilience-building in individuals, families and communities to prevent ACEs and to change our systems so that we don’t further traumatize already traumatized people. Several examples have been covered on ACEsTooHigh.com:

The Salon.com article, Is Your Kid an Addict?, was written by Jennifer Matesa and originally appeared on TheFix.com. It

focuses on the problem of underage drinking, which the CDC notes is a serious public health crisis.

Alcohol is the most commonly abused drug among America’s youth, more than nicotine and illegal drugs, and people aged 12 to 20 drink 11% of all the booze consumed in the US. Most of this alcohol—more than 90%, in fact—is consumed in binges. In 2008, underage drinkers made 190,000 emergency department visits for alcohol-related reasons.

Given the research from the ACE Study and other research that show how common dysfunctional families are, the solutions proffered are nearly laughable: “…parents should learn how to talk with kids about addiction and drug-use, and most of all learn how to demonstrate the behaviors they want kids to adopt.” And… “Experts said parents need to be firm about setting limits on drinking early in kids’ lives.”

Toward the end of the article, Matesa gives a nod to how dysfunctional families figure into kids’ problems with this: “Clemmens [Dr. Michael Clemmens, a gestalt therapist and author] and others also agreed that it’s impossible to talk about preventing teen addiction without talking about the health of the entire family,” and proceeds to describe the ACE Study. That’s a good thing.

It’s safe to say that without the same intensity of intervention that’s recommended for their children, many parents just can’t be that logical. If their own traumatic experiences prevent them from being interested in or even capable of being healthy parents, not only do they need help with their own past, but they need to be taught the skills of being a healthy parent.