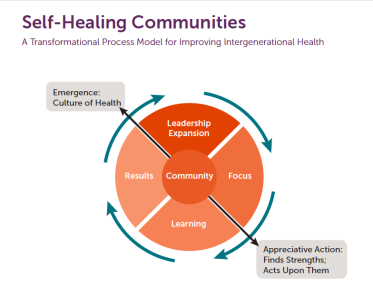 In an all-day workshop that Laura Porter was leading with community organizers and parents, she told the story of a woman from the Congo who had to leave her homeland. Before the woman left, she had a dream about living in the United States.

The woman said she imagined opening her door, letting her children run free, hearing them laugh and play. She envisioned people asking one another, “How are you?” without any compulsion to evade by answering, “Fine. I’m fine.” And, she added, “I could go with my children to the store and not have to be afraid that they would be arrested for being black.”

Porter was struck by the woman’s words—a vision of safety and belonging that is rarely voiced out loud. “As we’re engaging people, that dream is just under the surface,” says Porter. “When we touch on that, we touch on something very powerful: the core values…that go beyond political strife or individual experience. We can touch an aspirational world.”

The word “engage,” she explained in a recent webinar with communities participating in Mobilizing Action for Resilient Communities (MARC), comes from an Old French word with meanings that include the concepts of reciprocity and holding space. “Yet a lot of times, folks who are organizing want to engage people, but they don’t necessarily have reciprocity in mind. Nor are they intentionally leaving a line open for people to come in.”

Leaders’ efforts to engage non-professionals, youth, elders, parents and other community members may also be frustrated by childhood experiences of trauma and the ways those unspool in adults’ lives, she said.

People who grew up with high levels of chaos and danger may be more vigilant, quicker to anger, more reactive to stress and more sensitive to sounds, odors and sharp movements. They may excel in situations where the purpose and goals are clear but struggle with ambiguity, strong emotions and unpredictable transitions.

On the other hand, individuals raised with calm and safety may be able to tolerate multiple stressors, navigate emotional territory and make rational decisions in the midst of tumult.

“And yet,” she said, “we establish many of our structures for engaging the public in ways built for people who grew up in a safe environment.” She cited public hearings with citizen testimony, for example, as noisy, highly emotional environments that may activate stress responses among people who grew up with multiple adverse childhood experiences (ACEs). ACEs refers to the CDC-Kaiser Permanente Adverse Childhood Experience Study (ACE Study) and ACEs science, which shows how common childhood adversity is (most people have experienced at least one type), and that childhood adversity can cause the adult onset of chronic disease, mental illness, violence and being a victim of violence. (Got Your ACE Score?)

Instead, Porter recommends asking community members about strategies and structures that can work better: these may include smaller, “café-like” conversations, rituals and ceremonies, “drop-in” times when others are available to talk, and opportunities to learn together.

Any effort to engage community members must begin with genuine curiosity and a willingness to learn, not just educate, she said. “Are we opening up the space for people to say what they dream and pursue it, and for us to stand by them in that vision?”

Porter is co-founder of ACE Interface, a company designed to help engage and motivate everyone to prevent ACEs and improve well-being. In Washington, she and several colleagues developed a model for improving communities’ capacity to address social problems in a low-cost, sustainable and locally-generated way; they outlined that method in a recent paper, “Self-Healing Communities: A Transformational Process Model for Improving Intergenerational Health.”

The goal, Porter said, is “culture change,” a purposeful shift in a community’s embedded—and often unconscious—rules, patterns and standards for behavior. “Our job is to make an invitation that interrupts this auto-pilot of culture. We do that through our presence, through our curiosity—when we ask, ‘Tell me what it’s like to live your life in this neighborhood’—through our courage, through our understanding of the nature of adversity and by changing ourselves first.”

The Alaska Resilience Initiative—one of the networks participating in MARC—is learning those lessons first-hand. A gathering in May 2016 included Alaska Native and Native American people from every region in the state. Participants urged that any training on ACEs and resilience include an understanding of ongoing forms of systemic trauma and injustice, cultural strengths, and historical trauma, such as mandatory board school attendance or the loss of indigenous food sources.

Participants at the May 2016 gathering convened by the Alaska Resilience Initiative, First Alaskans Institute, and Native Village of Chickaloon.

They recommended that ACE trainings include Alaska Native people co-presenting or speaking for themselves about trauma whenever possible, rather than having non-Natives interpret their experience. And they advised funding mechanisms and structures that recognize power inequities and support collaborative, community-driven strategies for change.

Porter echoes those recommendations. She advises asking questions: “What are the barriers to asking for help? What makes it hard for you to contribute to the neighborhood or community? What is your dream?

“Community capacity building means investing in the people who have the most at stake so they can contribute core gifts, experience a sense of belonging and shape the future,” she said.

The Self-Healing Community Model, Washington, developed strong networks that promoted much greater collaboration across sectors. They empowered local leadership and nurtured sector leaders to think about whole systems, not just their part of a system. They also used data to decide how and where to focus efforts and to learn from what was working. They made visible changes that helped to instill a real sense of hope in communities that had given up on the prospect of a better world for their children.

Read guidance from the May 2016 gathering hosted by the Alaska Resilience Initiative, the Native Village of Chickaloon, and the First Alaskans institute on how to address trauma and promote resilience in Alaska, including suggested revisions for ACE and resilience train-the-trainer curricula.

This article was originally posted June 26, 2017, on marc.healthfederation.org and was written by @Anndee Hochman, a journalist and author whose work appears regularly in The Philadelphia Inquirer, on the website for public radio station WHYY and in other print and online venues. She teaches poetry and creative non-fiction in schools, senior centers, detention facilities and at writers’ conferences.